On May 24, Cygnus, the spacecraft from the ninth contracted resupply mission for Orbital ATK, berthed with the International Space Station (ISS) carrying another satellite-filled NanoRacks mission. 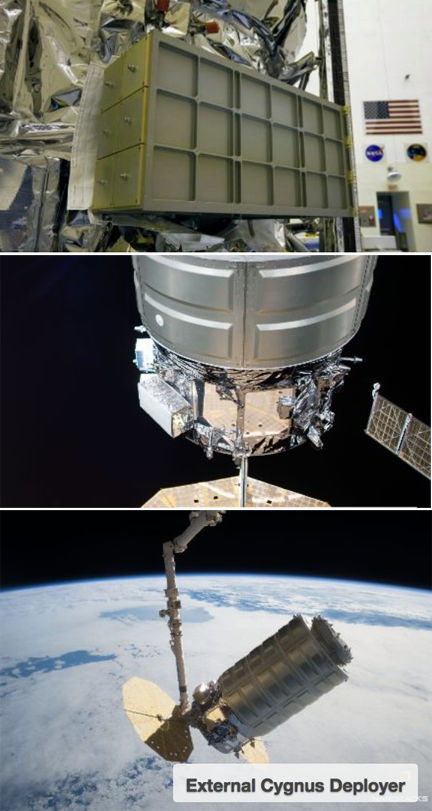 Photos of the NanoRacks External Cygnus Deployer (ENRCSD) is installed on the exterior of the Cygnus service module with the capability to deploy satellites.

NanoRacks brought two new commercial customers to the LEO ecosystem — Analytical Space Inc. and EnduroSat — this mission was the first ever for these firms' first smallsat. This was also the fifth mission wherein NanoRacks provided opportunities for cubesat deployment from Cygnus after the vehicle departs from the station. The NanoRacks External Cygnus Deployer (ENRCSD) is installed on the exterior of the Cygnus service module with the capability to deploy satellites after Cygnus’ completion of the craft's primary Space Station resupply mission. Additionally, this is the 14th mission for the NanoRacks International Space Station CubeSat deployments using the company’s commercially developed platform.

NanoRacks' External Payloads Manager Conor Brown said that this launch is yet another example of the technical advances and diversification of the smallsat industry. NanoRacks provided space access for commercial companies large and small, educational research institutes and NASA centers all driving innovation and pushing the limits of the cubesat platform as has never been seen before.

The ENRCSD satellites are scheduled to be deployed from the Cygnus vehicle in mid-July at an altitude above the Space Station orbit, pending all nominal spacecraft operations.

The CubeSats that will be deployed by NanoRacks on the International Space Station include:

Analytical Space’s primary mission with Radix will be a demonstration of an optical data relay system. The cubesat has the capability to receive transmissions at various frequency bands from the ground and/or from beta-test customer spacecraft already on orbit and store the data on board. Radix will then downlink the received data to the ground using laser communication.

The mission objectives for Radix are to prove the utility of a data relay service for current satellite operators. Increasing the data throughput for current and future satellite users will greatly increase earth observation and monitoring science downlinked to scientific and commercial users. This can increase mission payload utility for any customer satellite operator.

EnduroSat One, the first Bulgarian amateur radio smallsat mission, is a multipurpose cubesat platform engineered for space application and research. The electrical power system and solar panels will provide power for the mission. Two ultra-high frequency Transceivers type II and UHF deployable antenna will deliver a high-reliability communication system for tracking, telemetry and control (TT&C) and data. A network of actuators and sensors will enable spacecraft control and processing capabilities will be provided through the low power consumption and high performance onboard computer.

NanoRacks thanks Orbital ATK and the NASA International Space Station Program for their continued support of NanoRacks operations on the Space Station.