ILS Proton Counting Down For SkyTerra 1 And Max Coverage 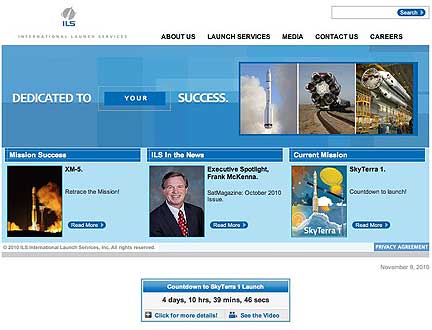 [SatNews] The launch of SkyTerra 1 on November 14 from Baikonur Cosmodrome, Kazakhstan, launch pad 39, and successful network commissioning is a major step in LightSquared’s creation of its next-generation, nationwide network that will be among the world’s first to combine satellite and terrestrial technologies. The Light-Squared network will enable the company to offer 4G speed, value, and reliability which enables universal wireless connectivity throughout the United States.

The Proton M launch vehicle, utilizing a 5-burn Breeze M mission design, will lift off from Pad 39 at Baikonur Cosmodrome, Kazakhstan, with the SkyTerra 1 satellite on board. The first three stages of the Proton will use a standard ascent profile to place the orbital unit (Breeze M upper stage and the SkyTerra 1 satellite) into a sub-orbital trajectory. From this point in the mission, the Breeze M will perform planned mission maneuvers to advance the orbital unit first to a circular parking orbit, then to an intermediate orbit, followed by a transfer orbit, and finally to a geosynchronous transfer orbit. Separation of the SkyTerra 1 satellite is scheduled to occur approximately 9 hours, 14 minutes after liftoff.