Analytical Space Inc. (ASI) is launching a technology demonstration spacecraft intended to pave the way for users on the ground to gain faster access to satellite data. The spacecraft features a patented MITRE antenna that could help enable that application, as well as government missions including tactical communications and intelligence, surveillance, and reconnaissance. 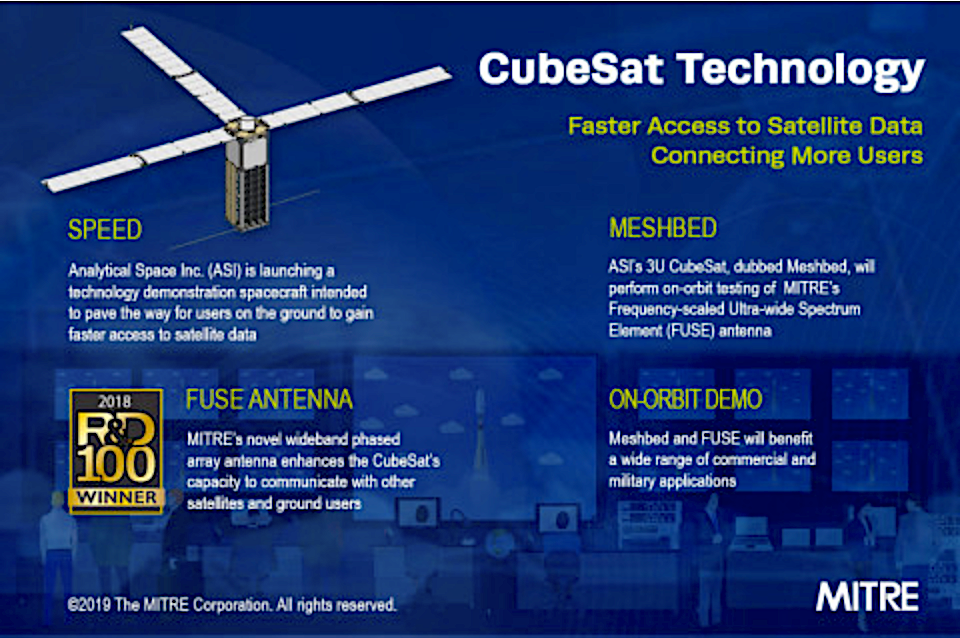 ASI’s 3U CubeSat, dubbed Meshbed, will perform on-orbit testing of MITRE’s Frequency-scaled Ultra-wide Spectrum Element (FUSE) antenna. The initial on-orbit demonstration will be dedicated to data collection to explore U.S. government applications for the MITRE technology. Meshbed will then shift its focus to testing ASI’s data relay capability, expanding on the testing achieved by its tech demo predecessor, Radix, which deployed from the International Space Station in 2018.

MITRE developed the FUSE antenna in collaboration with the U.S. Naval Research Laboratory as part of an effort to conserve topside space on ships. This new class of antennas has a novel electromechanical interface that eliminates the need for radio frequency connectors, reducing cost, weight and size. The company recently received three patents for FUSE, which has been successfully demoed in the field, and some of the technology has been transitioned as a multi-function system.1 R&D Magazine recently honored the MITRE team with an R&D 100 award for the FUSE antenna.

A new variation of the antenna built entirely of metal was further developed at MITRE. The latest breed (patent-pending) is scalable for CubeSat missions, maintains the same features from the original invention, and is produced at a more compelling price-point because of the use of metal additive manufacturing (AM) technologies. By solving the problem of fitting a wideband antenna onto a CubeSat and demonstrating that it can operate in the harsh space environment, FUSE will accelerate the development of high-performance and multi-function systems, with a wide range of applications that includes military use and commercial satellite communications.

Incorporating the wide frequency range of FUSE on Meshbed will enhance the satellite’s capacity to communicate with other satellites, a critical component of ASI’s data relay service. Together with the results from Radix, the testing performed on Meshbed will inform the development of future capabilities in ASI’s global network. The network will dramatically expand the downlink capacity of Earth observation satellites, which currently face severe constraints relaying data.

MITRE and ASI began working together through the MassChallenge startup accelerator as part of MITRE’s Innovation Bridge activities, an initiative to connect startups with government agencies.

“This partnership demonstrates our agility in collaborating with commercial and not-for-profit partners to develop innovative solutions,” says Dan Nevius, CEO of ASI. “We're looking forward to working with MITRE to continue developing and testing innovative solutions to meet government needs while fostering growth in the commercial sector.”

“This is a great example of MITRE’s ability to take technology developed to solve a difficult challenge for one of our government sponsors and accelerate technology development via government/commercial-partnered collaborative environment at an affordable cost,” said Jay Schnitzer, MITRE’s chief technology officer. “Working together with government and industry, we can apply our deep expertise to solve potential barriers to the effective use of small space systems.”