Until They Come Home — VSAT's Internet for U.S. Soldiers in Afghanistan and Iraq

Connecting more than 15 thousand military with a local broadband satellite Internet network in Iraq and Afghanistan is an accomplishment that TS2 Satellite Technologies doesn't take lightly — this is their specialty — providing global satellite communication services in areas with poor telecommunications infrastructure. TS2 Satellite Technologies' basic transmission medium is a two-way transfer of data, which provides not only the Internet access and transfer of information within the network, but also voice communications. These services are very often used by defense industries, Special Forces and Army.

"We were among the first telecommunications providers in the satellite technology in the territory of Iraq and Afghanistan and as such we have enjoyed a successful cooperation with the US Army for several years now," says Marcin Frackiewicz, CEO of TS2 Satellite Technologies.

TS2 Satellite Technologies offer two-way high-speed Internet access with no phone lines, no cable, no dial-up modem. It's always on, available virtually anywhere, and affordable. The laptop, or WLAN network, can receive an Internet signal through a special satellite VSAT modem, which is usually set up in a building or tent when deployed. 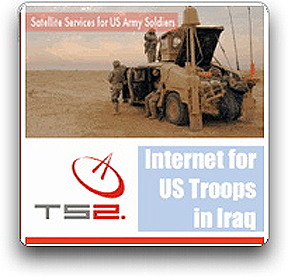 Because of this the Internet access has resulted in major morale improvements. Troops no longer feel cut off from home. This is especially important for the many who are married, and have young children. Not all the Internet connectivity is just for staying in touch with the folks back home. The troops use the Internet a lot for professional tasks, and not all of them are official business. Some troops blog, and many other stay in touch with military friends and associates in other parts of the world. The Internet has made possible many online communities composed of military professionals.