An interesting and inspiring report involving Iridium provides the history of the rise and fall and rise again of the company, its restructuring and sheer determination . . . 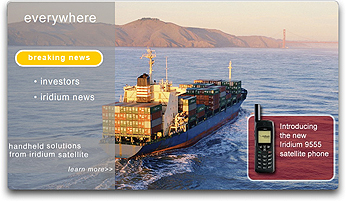 Ten years later, Iridium is alive and well in Tempe. The high-profile Motorola venture crashed in a spectacular 1999 bankruptcy after its technologically flawless but pricey satellite phone system failed to catch on with consumers. Only a handful of employees remained in 2000, when Iridium Satellites LLC paid $25 million for the array of orbiting satellites that Motorola and other investors spent more than $5 billion to develop.

The new leadership refocused the business on industrial customers, not consumers. The company, now profitable, is working on a $2.7 billion replacement of the aging satellite network. Fittingly, it has brought back many of the project's early engineers to design the new system. "I jumped at the opportunity to come back," said Suzi McBride, who joined Motorola in 1993 to help design the groundbreaking system that would provide wireless phone service anywhere in the world. "It was a fantastic project for a young engineer to work on because it had never been done before." She's been working on the next-generation satellite constellation for two years and finds the work just as exciting and rewarding as before. Of the 90 employees currently working for Iridium in Arizona, about half worked on the original project.

While Motorola's technology, which kept 66 satellites in seamless communication as they circled the globe, was viewed as brilliant, its business plan was a disaster. The $9-per-minute service and the clunky $3,000 handsets never caught on with consumers, who favored the conventional cellphone service that improved dramatically while Iridium was in development. Customers complained they applied for Iridium service, were sent information kits, but never were contacted by a sales representative.

They said they encountered programming problems on Iridium's Web site and the "runaround" from the company's representatives. "It was a good idea," said Jeff Kagan, an independent telecommunications analyst in Atlanta. "They just couldn't sell enough of them to make it profitable."

Iridium North America garnered only about 50,000 of the more than 200,000 customers it needed to be viable. It filed for Chapter 11 bankruptcy protection in 1999 after defaulting on $1.5 billion in loans. The service had been operational for only nine months. It was labeled one of the biggest business disasters of the decade and one of a series of business missteps that ultimately humbled telecommunications giant Motorola Inc.

After about a year in orbit, the entire network came close to burning up in the Earth's atmosphere when no one took over the network. Former Pan American World Airways President Dan Colussy finally put together a group to buy the assets, including the satellite network, Earth stations and Tempe headquarters building for $25 million. "The first day we had to buy supplies for the restrooms and start the business from scratch," said Matthew Desch, Iridium's chairman and CEO. The company, which once had hundreds of employees in Arizona, had only seven when the new group arrived.

Colussy refocused the business on industrial customers and the military. Instead of selling the high-priced service to consumers, he sold it to shipping lines, oil companies, railroads and trucking companies that needed to keep in contact with workers who were often out of the reach of traditional cellular networks.

Scott Mileur of Palmer, Alaska, uses an Iridium phone to communicate while guiding big-game hunting expeditions of Kodiak Island and other remote parts of the state, where there is no cellphone service. "I use it to arrange air pick-ups, to talk to my wife and communicate with other hunting camps," he said.

The company has 309,000 subscribers, including about 33,000 telephones deployed with the U.S. military and many more sensor-based applications to track equipment and soldiers. "When troops call home from Iraq, it's usually on one of our phones," Desch said.

Iridium phones also were a primary source of communication in New Orleans after Hurricane Katrina in 2005 and after the earthquake in China last year. "There will always be a need for a connection in an area where there isn't one," Kagan said. "In those areas, the only option is a service like Iridium." In addition to the U.S. military, major Iridium customers include ConocoPhillips, FedEx, UPS and MedEvac.

The phones still are expensive, about $1000, but they are significantly smaller and more technologically advanced than the originals. The service costs about $1 per minute, expensive by cellphone standards, but much less than when it was originally offered. Although Motorola insisted on developing its own technology and products, the new Iridium has dozens of partners who have developed specific applications using the company's technology. Autonomous data transmissions have become the fastest-growing part of the business, which had 2008 sales of about $300 million. Iridium technology is monitoring oil pipelines, wind turbines, generators and other equipment in remote locations all over the world.

Although the new company technically is based in Bethesda, Maryland, its human-resources, marketing, engineering and product-development operations are in Tempe, Arizona. The satellites are flown by the Boeing Co. from Leesburg, Virginia, under a contract with Iridium. The gateway, where data and phone transmissions are downloaded from the satellites to ground communications networks, is in Tempe.

Data transmission was an afterthought with the original system, but will be integral in planning the new satellites. They also will be designed to carry commercial payloads, such as climate sensors, for other companies. Iridium estimates the payloads could generate $1 billion in revenue over the estimated 15-year life of the new constellation.

Iridium expects to award a $2.7 billion contract later this year to either Lockheed Martin Corp. or Europe's Thales Alenia Space for 66 new satellites, plus six spares. The two companies are the finalists in a bidding competition for the work. Iridium plans to begin launching the new satellites in 2014 and have the system operational by 2016. The two arrays will initially operate in tandem, but eventually the older satellites will be taken out of orbit and eventually burn up in the Earth's atmosphere.

To help finance the new network, Iridium is proposing to merge with a publicly held special-purpose acquisition corporation formed by New York investment banker Greenhill & Co. GHL Acquisition Corp. raised $400 million, through an initial public offering, to be used to make an unspecified acquisition. The deal would make Iridium a public company again and provide a vehicle to raise capital to build the new satellites. GHL's stockholders are expected to vote on the deal later this year.

Kagan believes there clearly is more demand for Iridium service now than when it was first offered, largely due to computer advances, growth of the Internet and an increasingly global economy. "People increasingly need information from those remote areas," he said.