The Japan Aerospace Exploration Agency (JAXA) has reported that an unmanned cargo ship that was released from the International Space Station last week has failed to extend a cable that is required to test technology to remove debris from orbit. 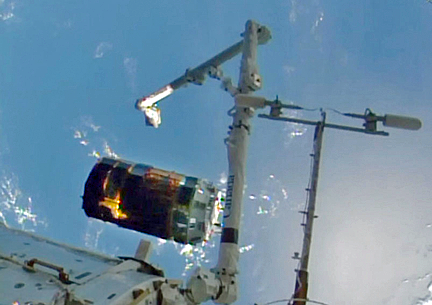 The Kounotori6 cargo transporter is released from the International Space Station early Saturday.

Image is courtesy of NASA/ VIA KYODO.

The Kounotori6 cargo transporter, which departed the ISS early Saturday, was initially scheduled to stretch the 700 meter long cable the same day, but was unable to do so, JAXA said on Tuesday. The agency said attempts will continue to extend the cable until Saturday, before the cargo ship burns up during re-entry on Monday.

The experiment is aimed at removing a piece of space debris by slowing that debris down with an electric current passed through the cable. Once slowed down, the debris should burn up in the Earth’s atmosphere. Roughly 18,000 pieces of debris measuring 10 cm or larger, from satellites and rockets, are estimated to be orbiting the Earth, posing a risk to the space station and satellites.

The cargo ship was launched last month from Kagoshima Prefecture to deliver seven smallsats and supplies to astronauts on the ISS.