Satellite Vu has been awarded the title of Best International Start-Up at the Supernova Challenge, part of the Future Stars event held during GITEX in Dubai last week. 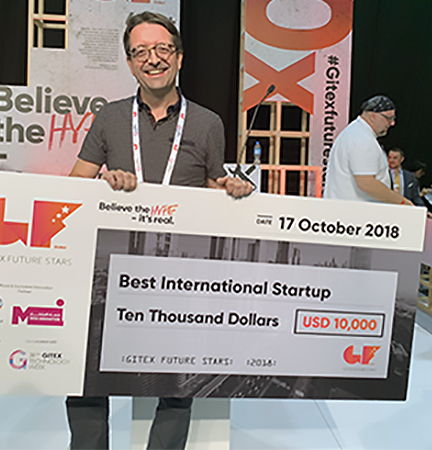 Satellite Vu's CEO, Anthony Baker, with the results of a rewarding event at GITEX.

Satellite Vu was invited to attend by the UAE’s Mohammed Bin Rashid Space Centre (MBRSC) as part of their Innovation Challenge. MBRSC aims to encourage the development of technologies related to space manufacturing and applications that can be used to ultimately improve the quality of life on Earth.

Satellite Vu is preparing to provide a disruptive service that will enable governments and organizations to take on the enormous challenge of plastic pollution in our marine environment. As humanity faces the prospect of more plastic than fish in our oceans by 2050, Satellite Vu is offering a sustainable solution that will provide frequent, precise and actionable data so that the origins and routes that plastic waste travels can be monitored and acted upon.

Satellite Vu will launch a series of 7 satellites with specially developed payloads that will produce high resolution infrared imagery, at less than 5 meters. This imagery is interpreted and converted into timely data using unique algorithms that end-users can readily access. Data produced by Satellite Vu can also be overlaid onto other forms of data such as social media, mobile phone and proprietary information. This results in another layer of intelligence from which new business insights may be generated. The satellites will re-visit a target site every hour, throughout the day and night, and produce imagery so that constant, near-real time monitoring is possible.

The judges’ criteria focused upon the originality of the idea, its potential in terms of longevity, actualization and profitability, the team, the functionality of the product or service and its impact on social, cultural and environmental issues.

Anthony Baker, CEO, Satellite Vu, thanked MBRSC and GITEX Future Stars for this great opportunity. This recognition is extremely important to the Satellite Vu team as the company continues to work toward addressing the scourge of plastic pollution — and ultimately making a real difference to the future of this planet.