NASA's New Horizons spacecraft carried out a short engine burn on October 3 to home in on the location and timing of its New Year's flyby of the Kuiper Belt object nicknamed Ultima Thule.

At right is a magnified view of the star-subtracted image, showing the close proximity and relative agreement between the observed and predicted locations of Ultima.

Images are courtesy of NASA/JHUAPL/SwRI/KinetX.

Word from the spacecraft that it had successfully performed the 3½-minute maneuver reached mission operations at the Johns Hopkins Applied Physics Laboratory in Laurel, Maryland, at around 10:20 p.m. EDT. The maneuver slightly tweaked the spacecraft's trajectory and bumped its speed by 2.1 meters per second — just about 4.6 miles per hour — keeping it on track to fly past Ultima (officially named 2014 MU69) at 12:33 am EST on January 1, 2019.

Mission Principal Investigator Alan Stern of the Southwest Research Institute said that, thanks to this maneuver, the farthest exploration of worlds in history is on time — more than a billion miles beyond Pluto. This almost sounds like science fiction, but it's not — go New Horizons. 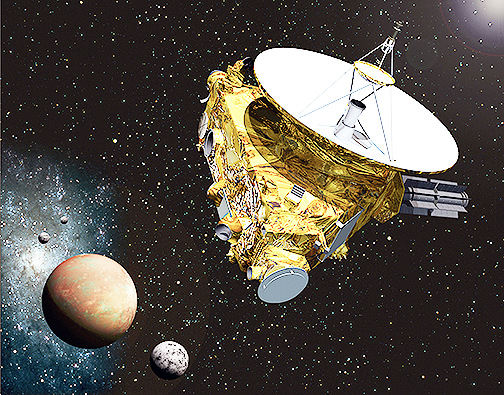 The New Horizons team designed the TCM by determining the current trajectories of the spacecraft and its target, and then calculating the maneuvering required to put the spacecraft at the desired "aim point" for the flyby – 2,200 miles (3,500 kilometers) from Ultima at closest approach.

Fred Pelletier, New Horizons navigation team chief, of KinetX Aerospace, Inc., noted that the recent navigation images have helped to confirm that Ultima is within about 300 miles [500 kilometers] of its expected position, which is exceptionally good.

Confirming that Ultima is at its expected location is an important and somewhat unique aspect of this flyby.

Derek Nelson, New Horizons optical navigation lead, also from KinetX, added that since New Horizons is flying very fast and close to the surface of Ultima, approximately four times closer than the Pluto flyby in July of 2015, the timing of the flyby must be very accurate,. The images help to determine the position and timing of the flyby, but the prior estimate of Ultima's position and velocity must be trusted to ensure a successful flyby. These first images give the confidence that Ultima is where it is expected to be, and the timing of the flyby will be accurate.

The spacecraft is just 69 million miles (112 million kilometers) from Ultima, closing in at 32,256 miles (51,911 kilometers) per hour. Pelletier said the team will eventually have to guide the spacecraft into an approximately 75 by 200-mile (120 by 320-kilometer) "box" and predict the flyby to within 140 seconds.