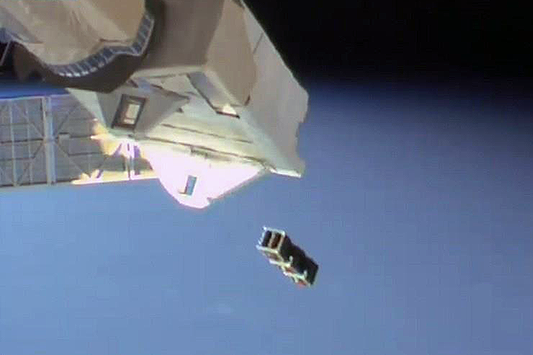 The launch of Sri Lanka's RAAVANA-1 smallsat from the ISS.

India's neighbor Sri Lanka marked its entry into the global space age with the successful release of RAAVANA-1, the country's first cubesat satellite designed for research into orbit, on June 17 from the International Space Station (ISS).

Raavana-1 was designed and developed by two Sri Lankan youth while studying space engineering at Japan's Kyushu Institute of Technology. The release was broadcast live on YouTube by the Japan Aerospace Exploration Agency (JAXA). The satellite had been stationed at the International Space Station prior to launch.

Raavana-1 will provide geographical images of parts of Sri Lanka from a distance of 400 km while orbiting the earth. The satellite has a minimum lifespan of 18 months. The satellite's Lora Demonstration Mission will validate the module to be used to download data from satellites that will be launched later on — this satellite is part of the BIRDS project of a UN initiative created to help countries launch their first satellites.