[SatNews] There were holiday decorations all around the room and not one, but two Christmas trees in the dining facility's reserved room at Forward Operating Base Fenty on December 18th.

"This is extremely important for our relationship with our Afghan partners," said Army Lt. Col. Al Boyer, commander of 2nd Battalion, 30th Infantry Regiment. "As part of respect for their culture, we spend time honoring and participating in their holidays, so we decided to invite them to participate in one of ours."

It was taco night at the dining facility, and the command had traditional Afghan food brought in to offer variety to the meal. According to Boyer the event was well received.

"Everyone's here," Boyer said. "We have every single Nangarhar ANSF leader here, as well as several local government of the Islamic Republic of Afghanistan leaders, the generals with their deputies, as well as the deputy governor of Nangarhar, to celebrate one of our holidays." 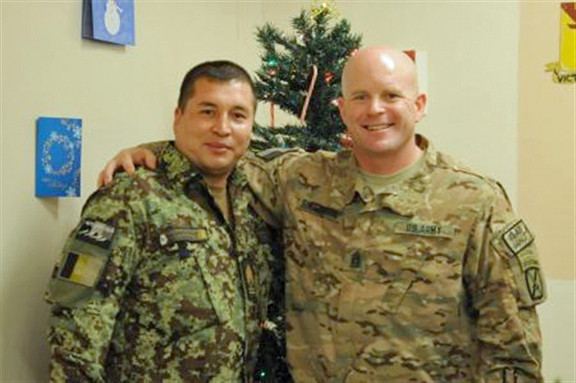 During the event, Army Col. Mario Diaz, commander of 4th BCT, 10th Mountain Division, expressed his appreciation for everyone's attendance and emphasized the importance Nangarhar plays in his brigade's mission in Regional Command-East, north of Kabul.

"What is present in Nangarhar is a special bond of friendship and respect, and it is my honor to be here with you today to share in the holidays," Diaz said. "We use the holidays to focus on ourselves as a people, to enjoy our families and look forward to the future."

During the event, 2nd Battalion's command presented a gift to each Afghan leader and, although this was a time to mingle and enjoy food, this was also a chance for the leaders to exchange important dialogue.

"We are able to provide a lot in the way of advising our [Afghan] counterparts ... and they look forward to having that interaction with us," Diaz said.

The command has specific ideas of what they wanted the Afghan leaders attending to leave the event with... "I want them to take away the fact that we have an understanding of each others culture—that we're very cognizant of their culture and they are cognizant of ours, and they are," Boyer said. "That's why they all showed up, out of respect for our culture and their willingness to celebrate our holiday with us."