exactEarth—Constellation Beefed Up By One (Launch) 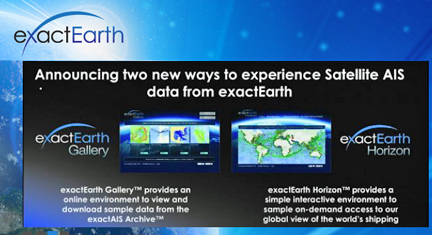 [SatNews] exactEarth Ltd. has launched an advanced AIS satellite that will extend its exactAIS® constellation and increase the capacity of its global vessel monitoring service.

The spacecraft was built by SpaceQuest, Ltd., of Fairfax, Virginia, and was launched from the Yasny launch base in Russia on 2013-11- 21 at 07:10:10 UTC aboard a Dnepr rocket. The addition of this spacecraft will increase the exactEarth constellation to five satellites and further improve exactEarth’s world-leading AIS message detection performance from space.

"We are pleased to announce the successful launch of EV5, another important step in our growing constellation of dedicated AIS satellites.” said Philip Miller, VP of Operations and Engineering at exactEarth.  “The satellite is performing to expectations and we are confident of quickly bringing the asset into operational use.  The addition of this satellite to our fleet is an important milestone as we continue to provide the world’s leading space-based global maritime vessel monitoring service.”