LeoStella, a smallsat design and manufacturing company, has inaugurated their production facilities in Tukwila, Washington. 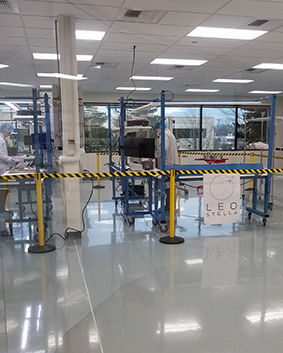 The first satellite produced by LeoStella will be an Earth Observation (EO) satellite for BlackSky’s constellation. The satellite is scheduled to be completed by the end of Q1 in 2019. The company is also contracted to manufacture the next 20 satellites in the BlackSky constellation.

When operating at capacity, LeoStella’s production facilities will enable the company to produce up to 30 satellites a year, ranging from EO and telecom satellites. Additionally, LeoStella has spent the last year selecting the firm's suppliers and forming partnerships with key vendors.

Chris Chautard, the LeoStella CEO, said that with the growing number of constellations, there is a large demand for efficient smallsat production and the company is uniquely positioned to address that demand. LeoStella is a unique blend of deep knowledge and expertise from Thales Alenia Space and innovation and agility from Spaceflight Industries. With the new facility, the company is equipped to design and manufacture smallsats efficiently.

Brian O’Toole, President of Spaceflight Industries and CEO of BlackSky, added that the firm is positioned to disrupt the smallsat industry. The company is critical to BlackSky’s success as all work to get this constellation on orbit quickly. Part of making space more accessible is lowering all of the associated costs, including the design and construction of the assets placed on orbit. LeoStella will make constellation production lean, nimble and affordable.