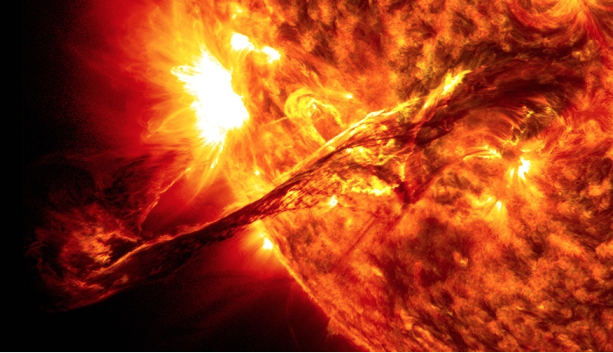 Coronal mass ejections from the Sun can knock out satellites, interfere with navigation systems and disrupt power grids. By NASA

“We have been lucky that we have not been hit by a really big event. We will be hit eventually, the question is, ‘when?’”

Excitement is building over European plans to launch a new space-weather satellite that would drastically improve forecasts of how solar storms will affect Earth.

The European Space Agency (ESA) hopes to send the probe to a gravitationally stable point in space known as Lagrange point 5 (L5) by around 2023, where it would provide a unique, side-on view of streams of charged particles heading towards Earth. The strongest of such eruptions, known as coronal mass ejections (CMEs), can knock out navigation and communications satellites, interfere with aeroplane navigation systems and disrupt power grids.

Currently, probes can only look at incoming space weather head-on. The side-on view would allow scientists to measure the speed of the bursts with greater accuracy. And by observing the Sun’s surface as it rotates towards Earth, the probe would give a preview of sunspots, some of which produce CMEs, before they directly face Earth (see ‘Parking space-weather probes’).

“An L5 mission would give something the others don’t have,” says Hermann Opgenoorth, a space-plasma physicist at the Swedish Institute of Space Physics in Uppsala. “We’re excited that it’s finally going ahead.”

European ministers agreed to fund the first design phase of the €450-million (US$478-million) mission with between €20 million and €30 million at a meeting in Lucerne, Switzerland, last month. The space-weather mission is aimed at forecasting, rather than pure science. ESA officials will ask for the rest of the funding at the next ministerial meeting in 2019.

Technically, ESA has yet to decide whether the satellite will go to L5 or to another gravitationally stable point, known as L1, between Earth and the Sun. Andreas Ottenbacher at the European Space Operations Centre in Darmstadt, Germany, who is a member of ESA’s Space Situational Awareness Programme, says that sending a new mission to L1 is essential, but the United States looks likely to do that in the early 2020s, leaving Europe free to explore the L5 mission.

L1 is well populated with probes, but some are ageing, such as the 20-year-old joint ESA–NASA Solar and Heliospheric Observatory (SOHO). And others, such as the US Deep Space Climate Observatory (DSCOVR), lack a coronagraph — an instrument needed to detect the onset of a CME, the most dangerous form of space weather.

Data from NASA’s twin STEREO satellites, one of which passed through L5 during its orbit of the Sun between 2008 and 2010, suggest that a permanent craft there should cut the uncertainty in CME impact time from 10 hours to less than 6 hours, says Mike Hapgood, a space-weather physicist at the Rutherford Appleton Laboratory in Didcot, UK, who chairs the UK Space Environment Impact Experts group. The profile view would also allow scientists to see whether separate CMEs interact to build up into a much greater shockwave.

Moreover, the L5 point would give a preview of the surface of the rotating Sun soon to be facing Earth — with benefits for forecasting and solar physics. Currently, forecasts from L1 can raise the alarm only once a ball of plasma has gone hurtling into space. With plasma speeds as high as 3,000 kilometres per second, this means just 15–17 hours’ warning — well short of the 2–3 days that power-grid operators say they need to prepare for disruption, says Juha-Pekka Luntama, who heads ESA’s space-weather team at the European Space Operations Centre.

From its shifted position around Earth’s orbit, an L5 craft would see the Sun’s rotating surface four to five days before one at L1 would. Although scientists can’t yet predict with great certainty when sunspots will erupt, just seeing the approach of active zones could allow them to raise an early warning that a dangerous space-weather event is more likely, says Luntama.

“It’s a little like a tornado warning in the US — you can’t tell exactly when it’s going to happen or where, but you can give a warning that there’s an increased probability of dangerous conditions,” Luntamasays. Combined with L1 data, an L5 craft would allow scientists to track sunspots for longer, which should help them to eventually work out what makes the features erupt and when, adds Opgenoorth.

An extreme space-weather event has not hit Earth since 1859, when a CME caused telegraph equipment to catch fire. There was a comparable event in 2012, but it happened on the opposite side of the Sun so did not affect Earth. The impact of an equivalent event, given today’s infrastructure, would be enormous, adds Luntama.

“We have been lucky that we have not been hit by a really big event,” he says. “We will be hit eventually, the question is, ‘when?’”