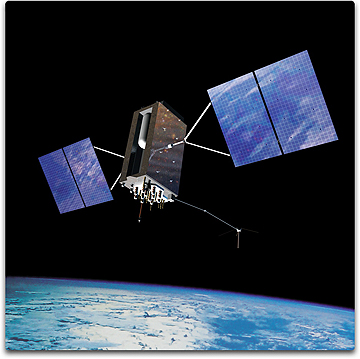 Everyone appreciates positive reinforcement, even big companies such as Lockheed Martin's [NYSE: LMT] team that is developing the U.S. Air Force's next-generation Global Positioning System (GPS) spacecraft, known as GPS III. This team continues to meet or exceed key milestones on schedule in the Preliminary Design Review (PDR) phase of the program.

This process will culminate with a comprehensive spacecraft Segment PDR in late May that will validate that the design meets warfighter and civil requirements prior to entering the Critical Design Review phase.

"The entire team is executing according to plan, achieving important design milestones and retiring risk for this critical program," said Col. Dave Madden the U.S. Air Force GPS Wing Commander. "Our steady progress is the result of a joint government-industry team focused on mission success and delivering the much-needed capabilities that GPS III will provide to users around the globe."

GPS III will improve position, navigation and timing services and provide advanced anti-jam capabilities yielding superior system security, accuracy and reliability. The team is working under a $3 billion Development and Production contract awarded in May 2008 to produce up to 12 GPS IIIA satellites, with first launch projected for 2014.

"Our proven heritage design of the various elements and strong partnership with the Air Force has been critical to the success of the PDRs and meeting the planned schedule," said Dave Podlesney, Lockheed Martin's GPS III program director. "We are on track to deliver a successful Segment PDR for our customer and move quickly and efficiently into the next phase of this essential program."

The GPS constellation provides critical situational awareness and precision weapon guidance for the military and supports a wide range of civil, scientific and commercial functions, from air traffic control to the Internet, with precision location and timing information. Air Force Space Command's 2nd Space Operations Squadron (2SOPS), based at Schriever Air Force Base, Colorado, manages and operates the GPS constellation for both civil and military users.