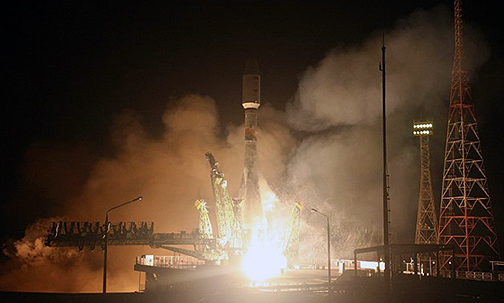 The launch of the EgyptSat-A satellite aboard a Soyuz-2-1b/Fregat rocket from the Baikonur Cosmodrome in Kazakhstan.

The EgyptSat-A spacecraft has been launched from Kazakhstan's 'Baikonur Cosmodrome' space port, according to Egypt’s National television.

The satellite, which cost approximately $100 million, weighs more than a ton, fully fueled. EgyptSat-A incorporated several improvements over the EgyptSat 2 design, including improved solar batteries and a high-speed radio link with ground stations.

EgyptSat-A, which arrived to its designated orbital slot 11 minutes after launching, is expected to serve the environmental and agricultural sectors in Egypt. Compared to EgyptSat-2, EgyptSat-A incorporates modernized electrical and flight control systems, an improved imaging payload, a higher-throughput communications system and more efficient solar arrays.

EgyptSat-A also benefits from being launched by a more powerful carrier rocket, that allowed the satellite to be placed into SSO that's more suited to Earth imaging than the lower-inclination orbit into which EgyptSat-2 operated.