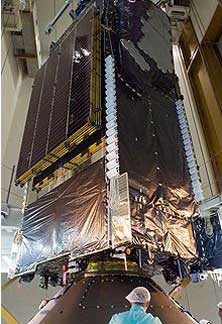 TerreStar-1 will be the world’s largest civilian telecommunications satellite ever launched, and it is riding as a solo payload on a dedicated Ariane 5 ECA.

(The photo at right shows TerreStar-1 being positioned on Ariane 5’s core stage during the integration process, which occurred in the upper level of the Spaceport’s Final Assembly Building).

Based on Space Systems/Loral’s 1300 platform, TerreStar-1 is to provide coverage over the U.S. and Canada – offering voice, data and video communications to satellite/terrestrial mobile devices the size of a typical smart phone.  The spacecraft will be operated by TerreStar Networks, Inc. and can generate over five hundred spot beams covering the Continental U.S., Canada, Alaska, Hawaii, Puerto Rico and the U.S. Virgin Islands.

TerreStar-1’s launch will be the third of seven missions planned by Arianespace in 2009 with the workhorse Ariane 5 launch vehicle.