OHB's 54th Mission with TEXUS Launch is a Success

During the morning of May 13, 2018, an unmanned TEXUS rocket completed its mission in the skies above Northern Sweden. 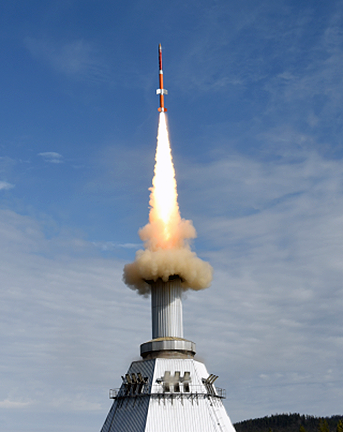 After lifting from the European launch pad ESRANGE near Kiruna at 10:30 a.m. local time, the rocket reached an altitude of 239 kilometers. Weightless conditions arose on board for six minutes due to the parabolic flight. TEXUS missions use this period to perform various scientific experiments and for technology testing under space-like conditions. Once again, OHB System AG, a subsidiary of listed space and technology group OHB SE, played a crucial role in the success of the missionTEXUS by making important contributions both in advance and at the launch site.

Four national experiments contributed by universities and research institutions had been selected for this mission, including an optimized optical frequency comb for transmitting data at high speed which was sent into space on board a TEXUS rocket for the third time and tested under weightless conditions.

Horst Pfeuffer, head of the TEXUS project at OHB System AG, said that as with all previous TEXUS missions, the company was once again responsible for integrating the experiments on board the research rocket and for the service systems. These include a service module with telemetrics, telecommand, TV image transmission, payload movement control and µg measurement units as well as a recovery system. At the ground control center, the company track the current trajectory by means of on-board GPS receivers. In this way, the experimenters are able to modify the parameters of their experiments during the free-flight phase via telecommands.

This year, a double TEXUS campaign has been scheduled for the launch pad in Northern Sweden, meaning that two TEXUS missions will be executed within the space of just a few days. Things will be heating up again for Horst Pfeuffer and his team from OHB as well as all the other participants and scientists at the launch pad on May 18, the date of the next TEXUS-55 mission.

Started in 1976, TEXUS is the German acronym for “Technological experiments in weightless conditions.” The initiator is DLR Space Administration. TEXUS-54 was executed on behalf of DLR with funding provided by the German Federal Ministry of Economics and Energy. OHB performs the tasks in consultation with the DLR Mobile Rocket Base (MORABA) in a subcontract for Airbus Defence and Space, Bremen.