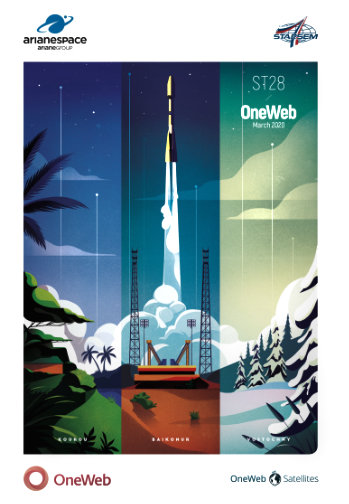 OneWeb has reportedly laid off 10 percent of its workforce due to reported – but unconfirmed – company plans that include Chapter 11 bankruptcy, reports journalist Chris Forrester, filing at the Advanced Television infosite.

The news comes as OneWeb reported the successful orbiting of 34 satellites from the Baikonur cosmodrome in Kazakhstan on March 21st on a Soyuz rocket organised by Arianespace. The success means that OneWeb now has 74 craft in LEO.

Referring to the layoffs, a company statement stated, "The OneWeb launch is going ahead on Saturday with more launches planned later in the year; however, like others, we are impacted by the global health and economic crisis and we need to dynamically adjust our workforce. Unfortunately, we think it is inevitable that there will be delays to our launch schedule and satellite manufacturing due to increasing travel restrictions and the disruption of supply chains globally. Therefore, we made the difficult decision to eliminate some roles and responsibilities as we work to focus on core operations. We are sorry to have had to take this step and we’re doing everything we can to support those affected.”

There are at least four key OneWeb locations. Officially the company is domiciled in West London, although it also has management offices in Mountain View, California, and near Washington DC (in McLean Virginia). The firm has a satellite manufacturing joint-venture with Airbus in Florida, near the Kennedy Space Center. Staff at any of these locations might be affected.

After Saturday’s launch, OneWeb focused on the positive news. In a statement, CEO Adrian Steckel said: “In these unprecedented times following the global outbreak of Covid-19, people around the world find themselves trying to continue their lives and work online. We see the need for OneWeb, greater now more than ever before.
“High-quality connectivity is the lifeline to enabling people to work, continue their education, stay up to date on important healthcare information and stay meaningfully connected to one another. The crisis has demonstrated the imperative need for connectivity everywhere and has exposed urgent shortcomings in many organizations’ connectivity capabilities. Our satellite network is poised to fill in many of these critical gaps in the global communications infrastructure.

Chris is also reporting at the Advanced Television infosite that a report from the International Center for Investigative Reporting (ICIR), which focuses on Nigeria’s troubled satellite operator NigComSat, states the organization is “still not profitable 14 years after launch.”

ICIR stated that NigComSat’s first working satellite (NigComSat-1R), that was launched in 2011, has barely six years of life remaining. Meanwhile, the organization has – since 2009 – received funding totaling more than $117 million (at current rates), although in Nigerian Naira it is N43.5 billion, of which just N13 billion was spent on capital items and N26.2 billion on staff salaries.

The recently appointed (August 2019) Minister of Communications and Digital Economy in Nigeria, Isa Ali Pantami, admitted the business was not “very viable.” In December of 2019, a new Board and executive directors were appointed.

An earlier Chinese-built satellite was launched in 2008 which cost $340 million (about Naira 40 billion at the time) but failed in orbit.

NigComSat is owned by Nigeria’s government. In 2018 it was announced that two new satellites would be purchased from China at an expected cost of $550 million.

A recent report from Nigeria’s parliament accused NigComSat’s senior management of incompetence. Chairman of Nigeria’s House Committee on Finance, James Falake, told NigComSat’s Managing Director, Abimbola Alale, in February, that, “We have to rescue this agency from you. In fact, if I had my way, I would recommend your [dismissal].”