Russian Phobos-Grunt Gets Delayed — Not Good News For China, Either 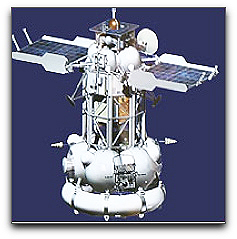 Russia will push back its flagship satellite mission to Mars' moon until 2011 in a move which will delay the joint launch of China's first Mars probe, space sources were cited as saying Wednesday. "The prospects of the spacecraft Phobos' flight to Mars was discussed at a conference of scientist and space industry firms today. The dominant opinion was that this flight would be put off until 2011," one source told the Interfax news agency.

The delay, just two months before the scheduled launch, will be officially announced this week by Russian Space Agency, Roskosmos, the source added. Russia's Phobos-Grunt unmanned probe aims to land on the Martian moon Phobos to collect soil samples. It was to blast off with the Chinese probe from the Baikonour cosmodrome in Kazakhstan next month. A later launch date should allow the probe a shorter trajectory for its mission, Interfax reported. But specialist news site RussianSpaceWeb.com cited industry sources as saying the launch will likely be postponed because the addition of China's 110 kilogramme (242 pound) probe had overloaded the mission. Russian planners were forced to upgrade from a Soyuz to Zenit rocket, causing delays while more tests are needed for the complex mission, it reported. China's Mars orbiter Yinghuo-1, designed to probe the Martian space environment looking for water, was shipped to Russia in August.