[SatNews] Stéphane Israël, Chairman and CEO of Arianespace, and Nelson Salgado, CEO of Visiona Tecnologia Espacial S.A., have signed a launch contract for the next Brazilian government satellite, the Geostationary Defense and Strategic Communications Satellite (SGDC), in Brasilia. 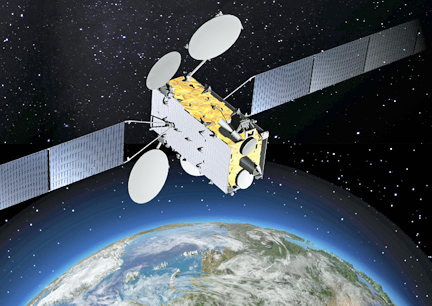 The contract signing ceremony was held under the auspices of Brazilian President Dilma Rousseff and French President François Hollande. Brazil's Geostationary Defense and Strategic Communications Satellite (SGDC) will be launched by an Ariane 5 in 2016 from the Guiana Space Center, Europe's Spaceport in Kourou, French Guiana. SGDC will be the 12th satellite orbited by Arianespace for Brazilian telecommunications operators.

Visiona Tecnologia Espacial S.A. is a joint venture between Telebras Telecomunicaçoes Brasileiras S.A. and Embraer Defense & Security. The SGDC satellite will be dedicated to strategic communications for the Brazilian Ministry of Defense, and broadband services for the Ministry of Telecommunications.

The SGDC satellite will be built by Thales Alenia Space, and will weigh more than 5,800kg at launch, with a design life exceeding 15 years. Fitted with X- and Ka-band transponders, the satellite will provide both civil and military telecommunications services from its orbital position at 75 degrees West. The five X-band transponders will cover all of South America and neighboring maritime routes. The Ka-band payload will offer isolated villages in Brazil access to high-quality broadband services at an affordable price.

Further information regarding Arianespace is available at: http://www.arianespace.com/