NSR Analysis: The Grand C-band Debate: Too Early to Predict a Winner? 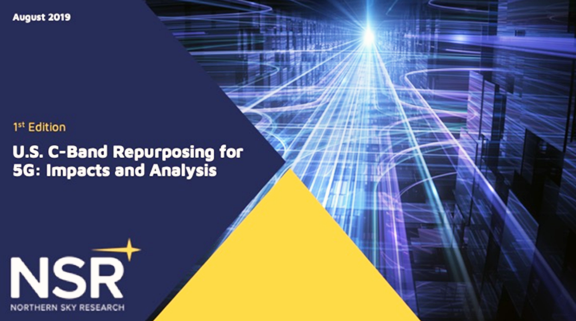 Two years since Intelsat first proposed it, C-band spectrum (3.7-4.2 GHz) repurposing has been a consistent news maker. Marred with differences of opinion on spectrum proceeds vs. the urgency of 5G deployment in the U.S., the proposal has been a political talking point:

From an initial 100 MHz originally offered by Intelsat, the position changed to 200 MHz repurposing with the C-band Alliance (now Intelsat, SES and Telesat comprising CBA) in early 2019. The latest proposal offers 300 MHz up for auction within 36 months (100 MHz in first 18 months). Is this timely enough?

To answer the above questions – let’s looks at the fundamental reasoning:

Currently 120 million households in the U.S. rely on video programming over C-band, which is largely leased (>90 percent) by Intelsat and SES (U.S.), making use of more than 250 transponders on several satellites, including data related applications as well – as presented by NSR in its 3rd Sept Op-ed.

Even though such a massive market exists (>$350M revenue YoY in short term), this mid band spectrum is arguably best suited for 5G, and thus in line with other countries – it needs to be auctioned for 5G.

Why 5G? Because there is an urgency towards growing GDP (fuelled by a magnitude higher bandwidth) and given that China is rolling out 5G (in 2019-2020) at least 2-3 years ahead of the U.S.

But why CBA? Because it is an assortment of all C-band lease providers in the U.S., thus making it easier to efficiently repurpose.

This A-B-C-D approach has been lauded within the telecom/satellite industry, and equally criticized for reasons that a private auction limits U.S. Government of critical funds to build rural broadband and that small satellite operators (who currently don’t lease capacity in U.S. on C-band) aren’t compensated for their current supply.

With the above reasoning, NSR believes that the critical need to rollout 5G and the case for rural broadband will overpower other arguments, leading to a combination of proposals being considered by the FCC – from the CBA, by representatives of U.S. Congress and the Cable Association.

While probability of public auction grows day by day, lag in timeline will most certainly affect the urgency need for 5G as well as compensation to operators. In it’s U.S. C-Band Repurposing for 5G: Impacts and Analysis report, NSR estimates that CBA operators could land proceeds (post U.S. Treasury cut and Tax) between $6.7-$9 billion for a sale between 200-300 MHz.

NSR estimates that up to 40 percent of proceeds amount could be taxed on top of a significant ~35-45 percent tranche going to the U.S. Treasury for rural broadband purposes in a public auction. While operators could spend up to $1.4B costs for repurposing 200 MHz spectrum, they could well cough up to $2.5B with 25 percent-35 percent cost upside (due to stringent timelines) in case of a 300 MHz auction.

Thus, the Minimum Net Proceeds for a 200 MHz case are estimated in the range of ~$6.7B, while this could be towards ~$9B in the scenario of 300 MHz case on account of higher MHz sale, albeit higher satellite + ground segment repurposing costs, higher percent proceeds to Treasury and missed short-medium term revenues towards data applications. The higher costs are expected given changes needed at consumer side equipment to allow for better transmission and compression (DVB-S2X and HEVC), resulting in 50 percent bandwidth gains a well as adding filters to Earth stations to account for changed frequencies.

While the upside remains very high ($6.7-$9B in Net Proceeds) for satellite operators to repurpose mid C-band spectrum, significant challenges remain with timelines extending up to 5 years (on account of probable 2022 auction + time to replace satellite/ground segment). The race to 5G with China, the negative GDP impact due to 5G rollout delay and the existing legal framework on protecting current C-band leaser rights does push the CBA case, and it is expected that the FCC/Treasury will negotiate a fair share of proceeds to the U.S. to enable this sale without long-term litigation.

Meanwhile, mobile operators are expected to remain cautious on spectrum spending vs 5G infrastructure deployment, with limited resources on hand, possibly giving indirect support to this extended timeline for repurposing.