Concerns Regarding the Planned SpaceX Constellation...

The Advanced Television infosite has posted an article that SpaceX is planning to launch thousands of satellites into various orbits in order to deliver broadband services to the whole planet — the first satellites will launch later this year, but there are some growing doubts.

The influential Institute of Electrical & Electronics Engineers (IEEE) in its ‘Spectrum’ issue talks about glitches with both of SpaceX’s initial prototype craft, launched almost a year ago, and which failed to reach their target orbits (of 1125 kms).

‘Spectrum’ quotes Tim Farrar (of TMF Associates) who said that one of the satellites was not able to relocate itself at all from its initial orbit of 511 kms, while the second satellite “tried to maneuver without success.” 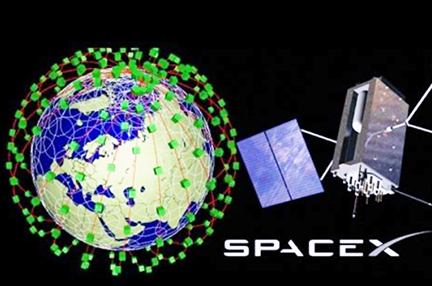 The IEEE’s report author Michael Koziol also cites anxieties about SpaceX’s overall chances of success, one of which is the wholly untested V-band (40-75 GHz) and the Very Low Earth Orbit (VLEO) of where SpaceX is planning to place a massive 7,518 satellites.

The FCC has approved SpaceX’s V-band plan (on a “permit but disclose” permission) and which will see the constellation operating at altitudes from 335 to 356 km high.

As the ‘Spectrum’ report reminds readers, these altitudes are extremely low. “A space-based network like SpaceX’s requires two more capabilities to be successful. First, the satellites must be able to communicate with one another directly. Traditional geostationary satellites, or geo-sats, work by receiving a signal from one location on Earth and directly beaming it somewhere else within its coverage area. But satellites orbiting close to Earth have such small coverage areas — ones that are constantly moving — that the signal received by one satellite will need to be bounced across the constellation and then back down to reach the right destination.”

The other major challenge is making money out of the system and the huge costs involved, not simply in the technological obstacles, but in competing with 5G and the world’s telcos who already have subscribers and clients. SpaceX has to create a business and infrastructure to handle a global system.