The rocket flew through a beautiful Northern light reaching an apogee of 138 km. The main payload landed safely under parachute, 82 km downrange. The main payload and ten free flying units were successfully recovery by helicopter on February 3. 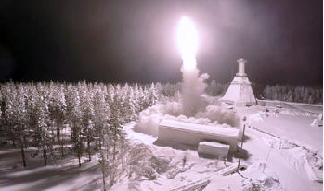 The launch of SPIDER / LEEWAVES. Photo is courtesy of SSC.
SPIDER was developed under the new Swedish national balloon and rocket program. SPIDER carried a payload of ten (10) free flying units (FFU) to be released from the main payload at ~65 km. The FFU’s will deploy probes on wire booms to measure turbulences in the auroral electrojet between 95 km and 115 km.

The payload was launched into a period of geo-magnetically active conditions to study the auroral electrojet.
The FFU’s will be deployed from a spinning main payload and use their residual spin after deployment to extract their wire booms. All FFU’s are self-sufficient and will be recovered by helicopter for data extraction after landing with their own parachute system.

LEEWAVES was also developed under the new Swedish national balloon and rocket program and is an additional module to the SPIDER payload and will carry four (4) falling spheres to be released from the main payload to study gravity waves in the atmosphere. The free falling spheres will be released, after the SPIDER FFU’s, to measure the vertical profile of the horizontal winds. The falling spheres are self-sufficient and will be recovered by helicopter for data extraction after landing with their own parachute system.