[SatNews] Residents of Beijing and many other cities in China were warned to stay inside in mid-January 2013 as the nation faced...

...one of the worst periods of air quality in recent history. The Chinese government ordered factories to scale back emissions, while hospitals saw spikes of more than 20 to 30 percent in patients complaining of respiratory issues, according to news reports. 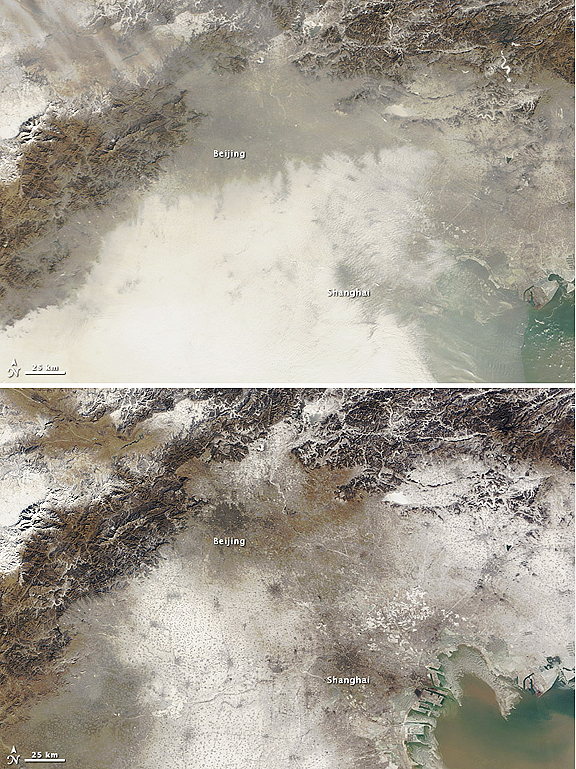 The Moderate Resolution Imaging Spectroradiometer (MODIS) on NASA’s Terra satellite acquired these natural-color images of northeastern China on January 14 (top) and January 3, 2013. The top image shows extensive haze, low clouds, and fog over the region. The brightest areas tend to be clouds or fog, which have a tinge of gray or yellow from the air pollution. Other cloud-free areas have a pall of gray and brown smog that mostly blots out the cities below. In areas where the ground is visible, some of the landscape is covered with lingering snow from storms in recent weeks. (Snow is more prominent in the January 3 image.)

At the time that the January 14 image was taken by satellite, ground-based sensors at the U.S. Embassy in Beijing reported PM2.5 measurements of 291 micrograms per cubic meter of air. Fine, airborne particulate matter (PM) that is smaller than 2.5 microns (about one thirtieth the width of a human hair) is considered dangerous because it is small enough to enter the passages of the human lungs. Most PM2.5 aerosol particles come from the burning of fossil fuels and biomass (wood fires and agricultural burning). The World Health Organization considers PM2.5 to be safe when it is below 25.

Also at the time of the image, the air quality index (AQI) in Beijing was 341. An AQI above 300 is considered hazardous to all humans, not just those with heart or lung ailments. AQI below 50 is considered good. On January 12, the peak of the current air crisis, AQI was 775 the U.S Embassy Beijing Air Quality Monitor—off the U.S. Environmental Protection Agency scale—and PM2.5 was 886 micrograms per cubic meter.