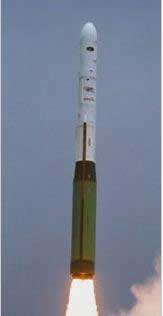 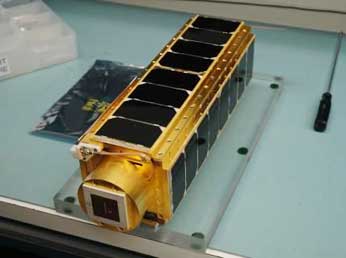 Also aboard were the Air Force Research Laboratory's TacSat-3 satellite and other NASA CubeSat Technology Demonstration experiments, which include three four-inch cubed satellites developed by universities and industry.

PharmaSat will investigate the effects of antifungal agents on the growth of yeast in microgravity. This research could improve understanding of how microbes may become resistant to the drugs used to treat sick astronauts on long-duration space missions. PharmaSat weighs approximately 10 pounds. It contains a controlled environment micro-laboratory packed with sensors and optical systems that can detect the growth, density and health of yeast cells and transmit that data to scientists for analysis on Earth. PharmaSat will also monitor the levels of pressure, temperature and acceleration the yeast and the satellite experience while circling Earth at 17,000 miles per hour. Scientists will study how the yeast responds to an antifungal treatment to learn more about drug action in space, the satellite's primary goal.

"After a spectacular launch as a hitchhiker on the Tacsat-3 mission, we made contact with PharmaSat and confirmed that the spacecraft deployed successfully," said Bruce Yost, PharmaSat mission manager at NASA's Ames Research Center in Moffett Field, California. "The PharmaSat mission and science teams are now preparing to complete the experiment on the yeast cultures."

Approximately 20 minutes after launch, PharmaSat separated from the Minotaur 1 rocket and entered low Earth orbit at an altitude of approximately 285 miles. About an hour after launch, NASA spaceflight engineers made contact with PharmaSat. After a spacecraft checkout period, ground controllers will command PharmaSat to initiate its biological experiment, which will last approximately 96 hours.

After PharmaSat separates from the Minotaur 1 rocket and successfully enters low Earth orbit at approximately 285 miles above the Earth, it will activate and begin transmitting radio signals to two ground control stations. The primary ground station at SRI International, Menlo Park, California., will transmit mission data from the satellite to the spacecraft operators in the mission control center at NASA's Ames Research Center, Moffett Field, California. A secondary station is located at Santa Clara University, Santa Clara, California. When NASA spaceflight engineers make contact with PharmaSat, which could happen as soon as one hour after launch, the satellite will receive a command to initiate its experiment, which will last 96 hours. Once the experiment begins, PharmaSat will relay data in near real-time up to six months, to mission managers, engineers and project scientists for further analysis.

The TacSat-3 launch was the third Minotaur vehicle launched from the Mid-Atlantic Regional Spaceport's launch pad 0B on the southern end of Wallops Island. Air Force Space Command's Space and Missile Systems Center's Space Development and Test Wing at Kirtland AFB, N.M., has overall management of the mission.