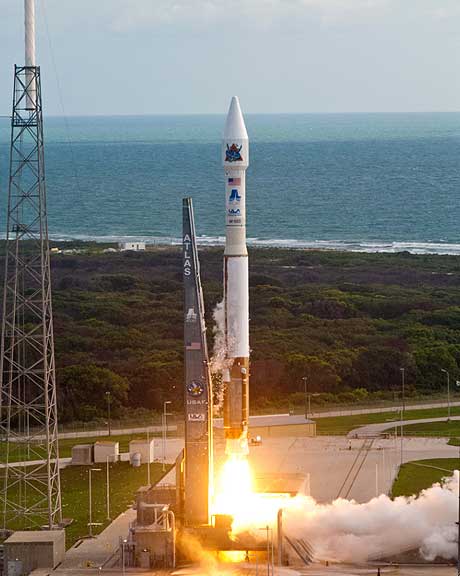 Developed by the United States Air Force to provide assured access to space for Department of Defense and other government payloads, the EELV Program – comprised of the Atlas V and Delta IV launch vehicles – supports the full range of government mission requirements, while delivering on schedule and providing a 33 percent cost savings over the heritage launch systems.

“The success of the EELV program is unmatched and ULA continues to deliver on its commitments,” said Michael Gass, ULA president and CEO. “We are incredibly honored to support customers who protect our national security, promote our quest to explore and understand our environment and universe, and promote commerce.”

Since the first EELV launch nearly 10 years ago, EELV has delivered tremendous capabilities for the nation. Atlas V has launched 31 times and Delta IV has launched 19 times, delivering nine commercial payloads, nine NASA spacecraft and 32 national security satellites. ULA is on plan to accomplish 11 EELV launches in 2012 and takes pride in delivering missions on schedule when our customer’s are ready.

“Evolved Expendable Launch Vehicles have allowed us to successfully launch 50 nationally critical missions over the last 10 years,” said Gen. William L. Shelton, commander Air Force Space Command. “We are proud of this launch success record, an amazing record in the history of spaceflight.”

“A properly sized economic order quantity buy for launch services enables continued success and reliability, maximizes cost reduction, allows opportunity for new entrants as they mature, and stabilizes a critical supplier base and workforce,” said Gass. “This buying approach represents the greatest potential acquisition savings for the EELV Program and the U.S. Government.”

The EELV Program development was initially contracted in October 1998, and both the Atlas V and Delta IV launch vehicles were conceived, designed and developed in just four years with the first flight of an EELV occurring in August 2002.

“Although the EELV Program was created by the Air Force, the Atlas V and Delta IV launch vehicles were designed and developed by Lockheed Martin and The Boeing Company, respectively, and the companies contributed 80 percent of the development funding,” said Gass. “Those substantial upfront investments make the Atlas and Delta vehicles the most commercially-developed launch vehicles flying today.”

In addition to the new acquisition strategy, ULA continues to work toward reducing costs, with programs in development to include implementation of a common set of next-generation avionics for both Atlas V and Delta IV, implementation of substantial reductions in production and launch span times, and development of a dual launch capability which can achieve a 40 percent savings per mission launched. ULA program management, engineering, test, and mission support functions are headquartered in Denver, Colo. Manufacturing, assembly and integration operations are located at Decatur, Ala., and Harlingen, Texas. Launch operations are located at Cape Canaveral AFS, Fla., and Vandenberg AFB, Calif.

For more information on ULA, visit the ULA web site at.

"Congratulations to the NRO and to all the mission partners involved in this critical national security launch,” said Jim Sponnick, ULA vice president, Mission Operations. “This launch marks an important milestone as we celebrate the 50th successful Evolved Expendable Launch Vehicle (EELV) mission, with 31 Atlas V and 19 Delta IV missions flown since August 2002.”

NROL-38 is the first of three critical missions ULA is scheduled to launch for the NRO within the next two months.

“Twelve of the 50 EELV launches have been NRO missions and these have been vital to our overall mission of delivering on commitments critical to our national security,” said Bruce Carlson, director, National Reconnaissance Office. “I thank and congratulate ULA and the EELV program for the tremendous performance and achievement of this very impressive and noteworthy milestone.” 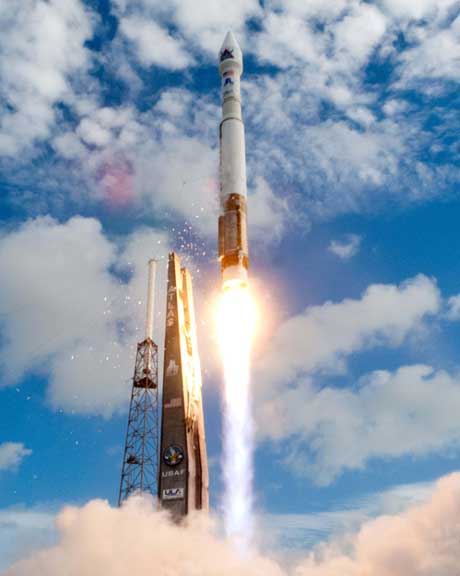 And continues to climb...United Launch Alliance (ULA) Atlas V rocket carries a payload for the National Reconnaissance Office (NRO) the mission is in support of national defense.