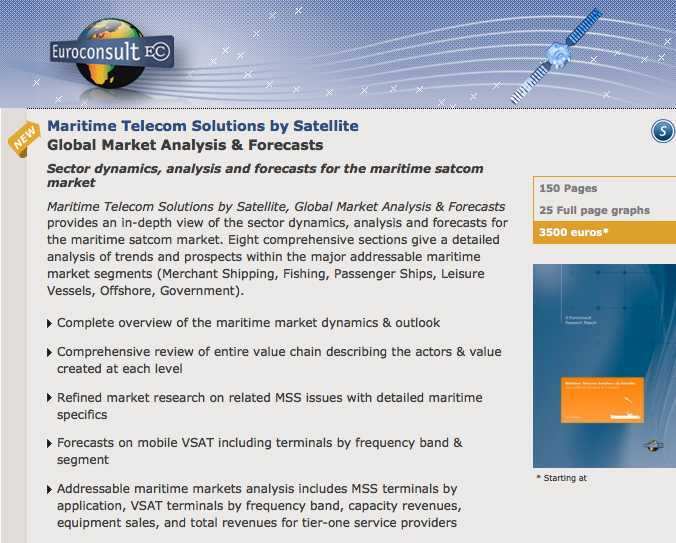 Euroconsult report infopage link
[SatNews] Euroconsult, a leading international consulting and analysis firm specializing in the satellite and space sectors, has forecast that the number of satellite communications terminals in the global maritime market...

...will nearly double over the next decade, with a compound annual growth rate (CAGR) of 7 percent over the 10-year period. While MSS terminals are still expected to account for the majority of terminals deployed over the decade, VSAT service providers should gain significant market share in terms of revenue in the coming 10 years.

In the second edition of the report Maritime Telecom Solutions by Satellite, Global Market Analysis & Forecasts, Euroconsult provides an in-depth view of the dynamics determining growth in the maritime satcom sector, along with analysis and forecasts for the different levels of the value chain. The report offers a detailed review of the merchant shipping, fishing, passenger ship, leisure vessel, offshore and government segments. The breakdown between MSS applications and VSAT frequency bands is explored through each of these sections.

Euroconsult said the number of terminals used for global maritime satellite communications grew at around 6 percent in 2011, while revenues at the satellite operator level increased by over 7 percent. The total size of the market reached about 317,000 active terminals in 2011 that generated more than $1.4 billion in revenues at the service provider level. Established MSS services and especially the emerging VSAT business contributed to the overall growth of the maritime satellite communications market. The report also suggests that the proliferation of new Ka-band based services, which allow much faster upload and download speed than either traditional VSAT or MSS, could expand the maritime market further. Inmarsat, the largest MSS operator, continues to ready its constellation of three Ka-band satellites planned to be operational by 2014/2015. Euroconsult projects that by 2021, the VSAT market will account for the majority of satellite-based maritime communications revenues. Overall, Euroconsult predicts that the maritime satcom market will grow at a healthy rate over the next decade, but not as rapidly as in recent years. The expected slowdown of revenue growth is mainly due to decreasing airtime unit and equipment prices with the overall improvement of technology.