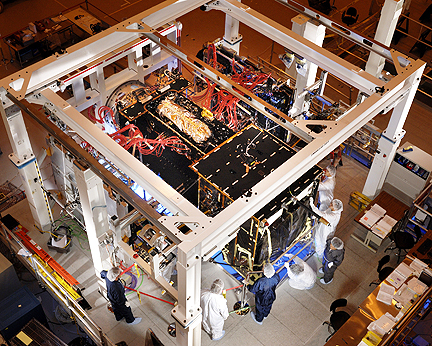 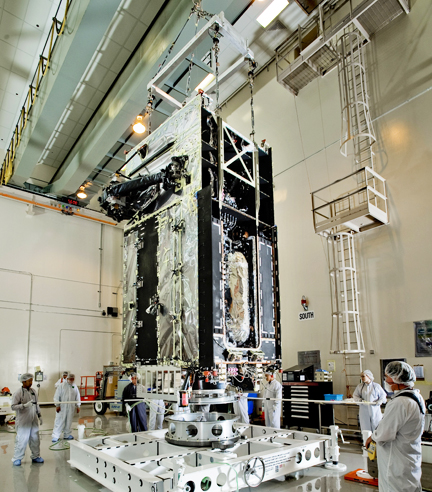 Further manufacturing at Lockheed Martin.
The satellite was verified as ready to proceed with the remaining rigorous integration and performance tests. Over the last four months, the GEO-2 space vehicle completed nearly 200 hundred scripted test events. These scripts were responsible for verifying the satellite’s vital subsystems. The GEO-1 satellite recently completed Thermal Vacuum testing and the team is preparing the satellite for delivery to Cape Canaveral AFS, Florida, later this year. This first round of system testing was performed with the satellite side panels in an expanded mode for easy access to satellite components. The development team will now continue GEO-2’s integration to its final, closed-panel configuration. GEO-2 is scheduled for launch in 2012.

“This marks two major milestones in the SBIRS program,” said Lt. Col. Heath Collins, the commander of the SBIRS Space Squadron. “It is the first time the GEO-2 payload and spacecraft bus have been integrated and operated together, and for the first time ever, we have two fully integrated SBIRS GEO satellites powered on and in test.” Lt. Col. Collins added, “initial results indicate the satellite is in good health and everything is operating nominally.  We’re ready to continue through our rigorous test program.”
Topical Tags :
Manufacturing
Military
Agencies
Launch
Satellite Operator
Regional Tags :
North America