Arianespace Preps A Six Pack And Marks A Milestone! (Launch) 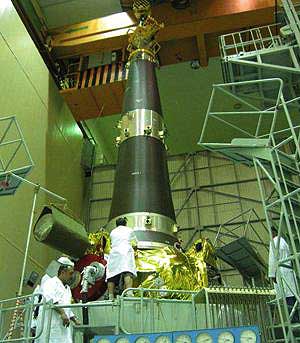 The payload dispenser for Arianespace’s upcoming mission with six Globalstar satellites is shown installed on the Fregat upper stage during a fit-check.
[SatNews] Every launch is important, but how about sending a half a dozen up, simultaneously? That's just what is occurring as preparations are underway for a milestone Soyuz flight during which Arianespace is to orbit the first six Globalstar second-generation communications satellites from Kazakhstan's Baikonur Cosmodrome in October.

The launch campaign for this mission began on August 11 with arrival of its initial three Globalstar satellites at the Cosmodrome, and has progressed as these spacecraft undergo their checkout in clean rooms that are dedicated to commercial Soyuz missions.

All three of the second-generation Globalstar spacecraft began their preparations in the Cosmodrome's Payload Processing Facility, which included electrical testing and radio frequency verifications.  The first of them was transferred to the Hazardous Processing Facility for the loading of its propellant today, which will be followed by this satellite's integration on a conical-shaped dispenser system that ultimately will carry all six of the mission's payloads.

Arianespace has been contracted to perform four Soyuz launches carrying six satellites each, further building Globalstar's constellation with these 24 second-generation spacecraft. Their deployment will secure the company's space segment beyond 2025, ensuring continuity for its mobile satellite voice and data services that are provided to businesses, governments and consumers.

The second-generation Globalstar satellites will have a liftoff mass of approximately 700 kg. each, and are fitted with 16 transponders from C- to S-band, along with 16 receivers from L- to C-band.

Arianespace's Globalstar missions will use the Soyuz 2 ST evolved version of Russia's venerable medium-lift workhorse launcher, which incorporates the enlarged ST payload fairing and an updated digital flight control system. The Soyuz 2 ST is the same vehicle that Arianespace will utilize at the Spaceport in French Guiana, operating side-by-side with its heavyweight Ariane 5.

For the upcoming Soyuz 2 ST launches, the six Globalstar spacecraft, built by Thales Alenia Space, will be stacked in two levels on the conical-shaped dispenser. Once loaded with the satellites, this EADS Astrium-produced dispenser is to be mated atop the Fregat upper stage, which will make three burns after it is delivered to low-Earth orbit by the Soyuz launcher. The trio of burns will enable Fregat to inject the satellite payloads into a 920-km. circular orbit, inclined 52 deg.

The dispenser is designed to accommodate two of the six satellites on its upper section, with their release occurring at 98.6 minutes into the flight. The other four payloads are to be installed on the dispenser's lower section and will be separated simultaneously 1.67 minutes later, completing the mission's deployment sequence.

Soyuz launchers have played a key role in the creation of Globalstar's satellite constellation. Earlier Soyuz versions were used in eight missions conducted from 1999 to 2007 to orbit a total of 32 first-generation Globalstar spacecraft. These flights were performed under the direction of Arianespace's Starsem affiliate, with each mission carrying four of the 450-kg. first-generation satellites.

The initial three Globalstar second-generation satellites arrived at Baikonur Cosmodrome on August 11 aboard an An-124 cargo jetliner (photo at left), and were transported via the launch site’s internal railroad system (center photo) to clean room processing facilities. At right is a photo of the Soyuz launcher’s dual-segment payload dispenser, which will carry a total of six Globalstar satellites on each of the four missions to be performed by Arianespace.
Topical Tags :
Agencies
Regulatory/Government
Launch
Satellite Operator
Service Provider
Regional Tags :
Europe
Global