The satellites were placed into a 651km sun-synchronous Low Earth Orbit (LEO) by a PSLV-XL launch vehicle from the Satish Dhawan Space Centre, Sriharikota launch site in India. The launch agency is ANTRIX and the Indian Space Research Organisation (ISRO). 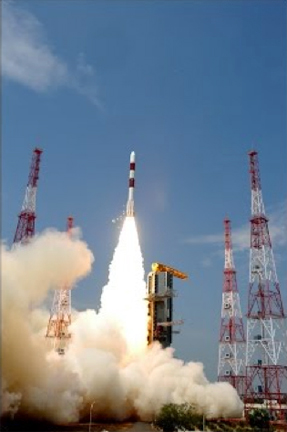 The ISRO PSLV-C28 launch of the SSTL satellites. Photo is courtesy of ISRO.

Sir Martin Sweeting, Executive Chairman of SSTL, said, “These new satellites are the latest and the most advanced of SSTL’s Earth Observation spacecraft mounted on a PSLV rocket dedicated to our mission—it was really exciting to be able to push the green button for launch and see them off into orbit!”

The three spacecraft use the 450 kg. SSTL-300S1 series platform. The agile SSTL-300S1 platform provides 45 degree fast slew off-pointing and is capable of acquiring multiple targets in one pass using multiple viewing modes. The very high resolution imager on board the satellites was designed and manufactured by SSTL and will provide 1 meter ground sampling distance (GSD) in panchromatic mode, and 4 meter GSD in multispectral mode, with a swath width of 23.4 km. 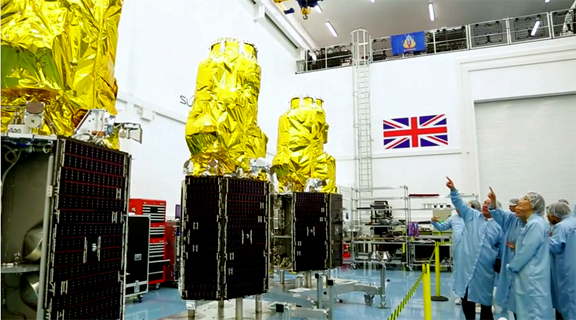 The final assembly and build phase of the DMC3 Constellation satellites at SSTL's cleanrooms in Guildford UK.

The three satellites will be phased 120 degrees apart around the same orbit using their on board propulsion systems within three months after the launch; thus, with off-pointing capability, the DMC3/TripleSat Satellite Constellation will be able to target any location on Earth once per day. In addition, the wide swath width of the satellites provides the best combination of spatial resolution and time resolution—aiming at stimulating operational monitoring applications, such as urban planning and intelligent management, based on changes detected by timely and regular cloud-free, very high-resolution imagery.

The Twenty First Century Aerospace Technology Company Ltd (21AT), a commercial Earth observation satellite operator based in Beijing, has bought the imaging capacity of the three satellites. The cooperative contract for the DMC3/TripleSat Constellation was signed in London in 2011 and witnessed by the UK Prime Minister, and China’s Premier.

Mme Wu Shuang, CEO and President of 21AT, said, “This is the first step of our long march and we are looking forward to the commencement of our BJII data services following the completion of the commissioning of the DMC3/TripleSat Constellation.”