[SatNews] Six satellites have been integrated on their dispenser for orbiting on the next Soyuz flight..

The six Globalstar satellites are ready for the next Soyuz flight operated by Starsem, which is Arianespace’s Euro-Russian affiliate responsible for commercial missions with this medium-lift launcher at the Baikonur Cosmodrome. 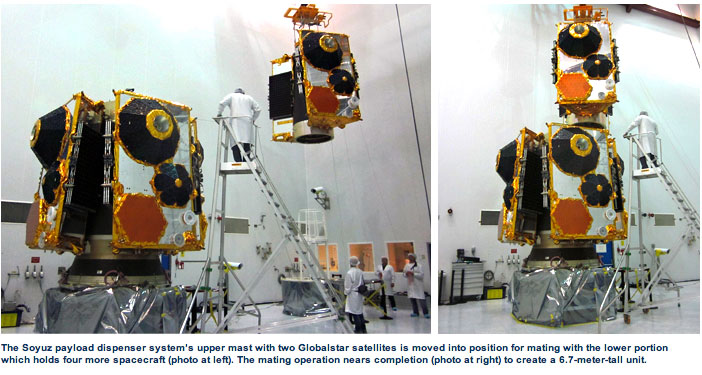 During activity today in Starsem’s clean room facilities at the Cosmodrome, the satellite dispenser system’s upper mast section was mated with the lower mast portion, creating a 6.7-meter-tall unit that contains the complete payload “cluster.”

Two of the 700-kg.-class Globalstar spacecraft are installed on the mast’s upper portion and will be deployed first during the February 4 flight, while the remaining four satellites are positioned on the lower section for their subsequent release in the mission sequence.

These satellites—supplied by Thales Alenia Space—are trapezoidal in shape, allowing them to be installed around the conical payload dispenser.

The upcoming Starsem mission is the final of four flights currently contracted to Arianespace for orbiting the second-generation Globalstar constellation—wrapping up a series of launches that started in October 2010, and continued in July and December 2011.

It will be the 26th performed by Starsem since beginning operations at Baikonur Cosmodrome in 1999 on a historic introductory commercial Soyuz flight also at the service of Globalstar—carrying four of its first-generation constellation satellites.