NSR — Reusability In Vogue, At Last?

The space industry has fantasized about reusable vehicles for decades, though several expensive and failed efforts along the way left nearly all doubting their feasibility.

Even following April’s successful launch of SES-10 on a reused Falcon 9 first stage, questions regarding the business case have dogged players pursuing reusability, splitting the votes as to its significance for the global launch market. Is it OK to brush reusability aside, or is discounting its impact putting too much stock in an expendable market that may soon disappear?

The truth, of course, lies somewhere in the middle. 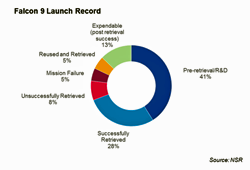 Over the past seven years, SpaceX has undertaken 39 Falcon 9 missions, of which one-third had some element of successful reusability. SpaceX twice demonstrated that a previously flown 1st stage can contribute to a successful mission, and Blue Origin launched the same New Shepard five times. The technical case for reusability is self-evident.

SpaceX claimed a more than 50% cost reduction on the first stage that launched SES-10, and aims to improve this margin while also achieving full vehicle reusability and a 24-hour turnaround time by the end of 2018 (though applying the usual SpaceX ‘delay factor,’ we can expect to see this between 2020-2021). Full reusability should further reduce launch costs, while ultimately making the launch industry more sustainable.

With CAPEX on an average commercial GEO communications satellite pinched due to falling capacity prices and impending non-GEO competition, any decline in launch prices will be attractive to operators and may help to close business cases on otherwise untenable investments. As reliability metrics increase, reusable vehicles will be more and more appealing. SpaceX has already proven successful at winning market share, and price reductions from reusability will further pressure the competition particularly if they are able to increase launch availability and deliver on schedule. Commercial and government customers have indicated their willingness to launch on a reused vehicle following successful demonstrations, and insurance underwriters deem the practice of minimal additional risk to a mission. With a strong technical track record to date and this buy-in across the value chain, reusability will become a standard offering of the global launch market in the next decade.

NSR does not anticipate the order of magnitude – or more – decline in commercial launch costs initially promised with reusability. With minimal market elasticity, SpaceX has no motivation to provide a significant drop in launch prices while their competitors are restricted to a minimum price far above that at which SpaceX could still profit. Moreover, efforts to recoup NRE costs will keep prices high. Musk has stated that ~$1 billion of R&D went into reusability; given SpaceX’s comments on current savings per reused booster of ~50%, minus the discount extended to customers, dozens of launches will be required before the incremental savings match investment. Blue Origin’s timeline to breakeven remains undisclosed, though may be less significant given Bezos’ comments on the nature of his funding for the company.

While all but one major global launch provider are pursuing reusability in some form, only SpaceX will offer reusable launch in the near term followed in the early 2020s by Blue Origin and soon after ULA. The potential impact of any single provider in the global launch market is diluted by the endurance of captive markets and strategic interests that keep national launch service providers in operation as well as the commercial preference for a minimum of three competitive suppliers. As such, SpaceX prices will be just one element of the larger average, a factor that NSR estimates limits commercial GEO pricing declines to 10% per kg in the next five years and 19% by 2026. 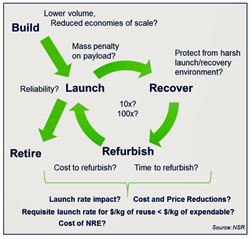 Many moving parts factor into the strength of the business case for reusability, and despite positive signs of reliability and minimal refurbishment requirements, unknowns remain. The impact on manufacturing rate and the reliability that results from an ongoing production line has yet to be tested, as does the effect on launch rate.

Though reusability has captured the attention of the industry with each successful launch and landing, it is not yet a dominant factor in the global launch market. Lingering questions on the business case will be addressed, but the need to recoup NRE and the strategic nature of launch will restrain its impact – meaning the introduction of reusable vehicles will not drastically change today’s competitive dynamics and pricing. Nonetheless, the upcoming generation of launch vehicles will likely be the last dominated by an expendable architecture. Reusability has set the stage for a new way of operating and will be the mode of competition in the future.