GMV has accepted the responsibility of designing the Guidance, Navigation and Control (GNC) system of the international mission HERACLES, a human return to the moon mission — the European Space Agency (ESA) is leading this mission, with the Canadian Space Agency (CSA) and the Japanese Space Agency (JAXA) contributing their expertise. 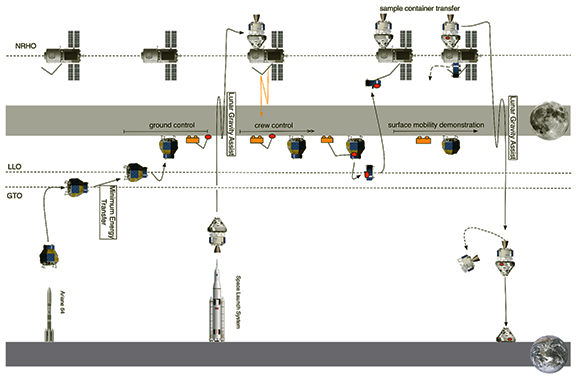 The mission goal is to return samples from the moon with a European developed spacecraft. A Canadian rover will collect these samples on the lunar surface during a two-month period of activity. The Canadian rover will accomplish this project through a liaison and coordination with the future lunar Gateway. An additional European contribution is an interface element that deploys the Rover on the lunar surface. Japan is developing the propulsive stage that will land a complete robotic stack on the moon. After the return of the samples, the rover will continue to explore and scout the Moon in preparation for human missions that will last for as much as a year.

The HERACLES mission has to meet several concurrent technological challenges: to demonstrate human-controlled subsystems, such as propulsion, guidance, navigation and control; to test communication technologies and to control the mission from Earth or from the astronaut-run Lunar Gateway. 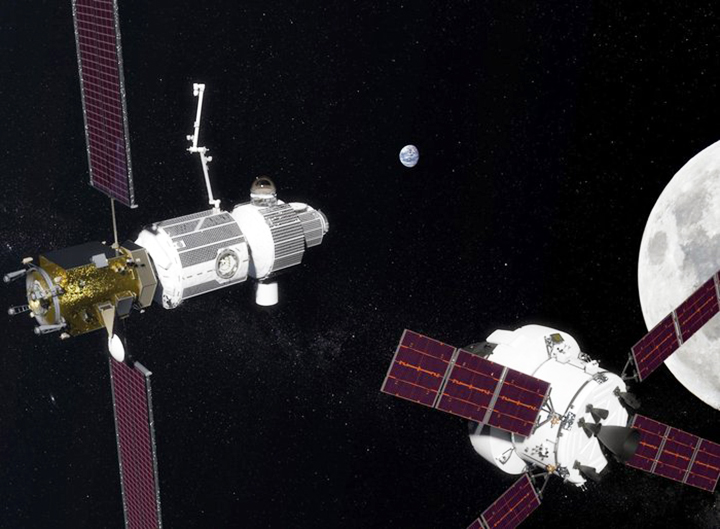 Artistic rendition of the HERACLES mission and the space GATEWAY. Image is courtesy of NASA.

While scientists from Europe, Japan, and Canada will specify the final landing site, the reference touch-down site for the lander is assumed to be the Schrödinger crater. This is an ideal site since recent volcanic activity (geologically speaking) will result in a more diverse and better quality of samples. For its part, the Gateway will be in a Near Rectilinear Halo Orbit (NRHO) close to the lunar poles, the spot from where the European ascent element will return with its samples.

In the international HERACLES mission, GMV is leading the consortium that is designing the guidance, navigation and control system for the ascent from the moon’s surface, for orbit transfer and for rendezvous and docking with the Gateway. In collaboration with GMV personnel in Portugal and Thales Alenia Space France and Italy, GMV will be developing a trajectory analysis tool for analyzing the transfers from low moon orbit to the NRHO orbits and for the rendezvous in the NRHO orbit. This tool will serve as the basis for the guidance function. GMV will also take on the design and development of the guidance, navigation and control (GNC) system and implementation of onboard algorithms, plus demonstration of a GNC prototype for trialing the technology of this future mission.

GMV is also responsible for the GNC of the rendezvous and docking phase in one of the system studies, the Thales Italia-led ESA study for designing HERACLES’s rest component.

In the words of Mariella Graziano, Executive Director of GMV’s Space Segment and Robotics Business Unit, the HERACLES mission represents a great technological space-exploration challenge for Europe. It will serve as a technological demonstration for missions to the Moon as well as pave the way for the future colonization of the Moon and missions to more distant planets.