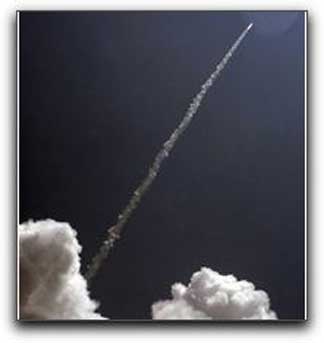 On August 29, India aborted an $82 million mission to map the surface of the moon after losing contact with its unmanned Chandrayaan I craft. Today they turned the negative into a positive and more than made up for this by launching seven satellites from a single rocket, demonstrating its growing skills in multi-satellite launches. Last year, India put 10 satellites in space in a single launch. Photo courtesy of Voice of America: India's Polar Satellite Launch Vehicle (PSLV) takes off from the space center in Sriharikota, India, September 23 2009

“This once again proves we can do our job precisely,” Madhavan Nair, chief of Indian Space Research Organization, said in a televised conference today. Six smaller probes, two from Germany and one each from Turkey, Switzerland, Luxembourg and Sweden were carried with the 970-kilogram (2,138-pound) Oceansat 2 satellite.

Within a space of 20 minutes, an Indian rocket placed one big satellite and six small ones into space from the Sriharikota space center in eastern India.