Sweden's government has backed plans to build Europe's first launchpad for small satellites in an important step forward for the Swedish space industry.

The plan for the new site at Esrange, Sweden's Arctic space base, is part of the new national space strategy announced on Wednesday by Helene Hellmark Knutsson, Sweden's minister for higher education. The new strategy did not, however, commit to funding the new facility, which the Swedish Space Corporation (SSC) has estimated will cost around 500 million Swedish kronor (US$50 million). Funding is expected to be discussed during budget discussions in the Swedish parliament this autumn. 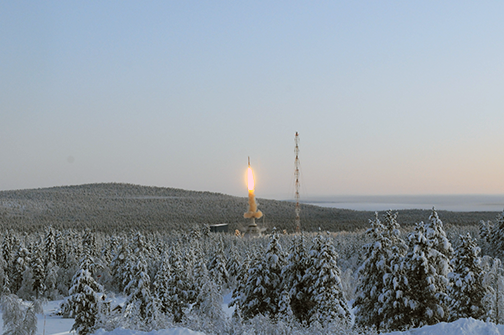 Photo of a launch from the Esrange rocket launch site in northern Sweden.

More than 500 rockets and 500 high altitude balloons have been launched from the Esrange Space Centre  since the site was established in 1966 at 200 km north of the Arctic Circle. The center is also used for controlling and receiving data from satellites launched from other sites.

Hellmark Knutsson said that Esrange, the nation's own space base, will be modernized and upgraded to build a test bed where rocket techniques can be appraised. In the next stage, the site can be developed to make it possible to send up small satellites into orbit around the Earth.

Stefan Gustafsson, SVP at SSC, welcomed the decision, saying this showed the government was finally "opening the doors" to the project. He said that there's a larger demand for launch facilities from the market than what is available today. It's very important to be able to launch small satellites from European Union soil. Europe needs this. Small satellites are more and more important for societal functions and for developing a sustainable planet. Lack of launching facilities is hampering the development of this important space infrastructure.