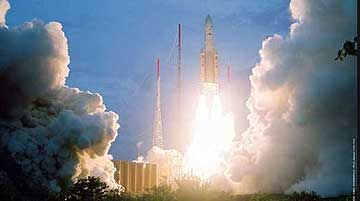 Example of successful Araine 5 launch: 29 October 2009: The sixth Ariane 5 mission of 2009 has successfully launched two telecommunications satellites, NSS 12 for the European operator SES and THOR 6 for the Norwegian operator TELENOR Satellite Broadcasting. Astrium is single prime contractor for the Ariane 5 system, responsible for delivery to Arianespace of a fully integrated and tested launch vehicle.
[SatNews] Astrium has been selected by the European Space Agency (ESA) to undertake initial development studies for a Next Generation Launcher (NGL) for upcoming satellite launches.

This 15 month project has a total contractual value of €8.5 million, of which Astrium will contribute €1.5m of its own funds.

“This contract will enable Astrium to investigate the most promising options for the next generation of European launcher in collaboration with nine European countries with past experience of working on the Ariane program.” said Astrium Space Transportation CEO Alain Charmeau as he signed the contract.

The NGL project is part of ESA’s Future Launcher Preparatory Programme (FLPP), which aims to prepare a proposal combining all the technical and organizational aspects of the program for presentation at the next  ESA ministerial conference.

“Astrium is designing, developing and building Ariane launchers.” said Alain Charmeau. “So the teams are obviously proud to be asked to contribute their know-how to what will eventually be Europe’s future launch vehicle. For some of them, this project will take up a major part of their professional lives. The development of a new launcher involves creating the technologies of tomorrow, whilst minimizing development costs and ultimately operating costs. It’s the adventure of a lifetime."

Europe requires a new launcher to assure continuity and preserve its independent access to space. The study will look towards 0225 for institutional missions covering a performance range from three tonnes into geostationary orbit (including a four tonne segment into sun-synchronous orbit (SSO)) through to eight tonnes. The NGL will be phased in with the Ariane 5ME (Midlife Evolution), an evolved version of Ariane 5 for which a preparatory programme was set in motion during the 2008 ESA ministerial conference. The Ariane 5ME represents a much-needed response to the institutional and commercial markets’ requirements for a medium-term launch capacity for heavy satellites in geostationary orbit (with a launch mass of more than 11 tonnes).

ESA and Astrium will concentrate on the aspects of the project that will help to improve competitiveness between now and 2025, with special emphasis on reliability, availability and lower costs, in particular operating costs. The study will focus on modular concepts capable of covering the intermediate propulsion power range.

The project is divided into three parts: definition of a launcher concept, required technological innovations, and the costs of building and operating the new launch vehicle:
— Architectural design studies will be conducted for the launch-vehicle concepts [that were] short-listed in the first period of the program in 2007/2008: — Innovative technologies will be identified in all relevant areas (propulsion, materials, structures, avionics, pyrotechnics). They will be assessed both in terms of their intrinsic capacity to improve performance and, more especially, from the point of view of cost of ownership and lifecycle considerations. — Cost estimates will be drawn up for each of the proposed concepts, not only for the development phase but also with respect to lifetime exploitation costs.

Astrium, a wholly owned subsidiary of EADS, is dedicated to providing civil and defense space systems and services. In 2009, Astrium had a turnover of €4.8 billion and more than 15,000 employees in France, Germany, the United Kingdom, Spain and the Netherlands. Its three main areas of activity are Astrium Space Transportation for launchers and orbital infrastructure, Astrium Satellites for spacecraft and ground segment and Astrium Services for the development and provision of secure and commercial satcoms and networks, high security satellite communications equipment, geo-information products and services, and navigation services.

EADS is a global leader in aerospace, defence and related services. In 2009, EADS generated revenues of €42.8 billion and employed a workforce of more than 119, 000.