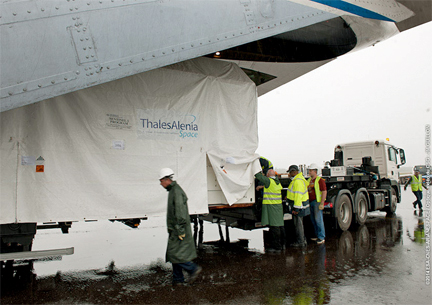 Sentinel-1A is unloaded from the An-124 cargo jetliner after its arrival at Félix Eboué International Airport near French Guiana’s capital city.
Photo courtesy of Arianespace.

Sentinel-1A was transported by a chartered An-124 cargo jetliner that landed at Félix Eboué International Airport near French Guiana's capital city of Cayenne, and subsequently was unloaded for the spacecraft's transfer by road to the Spaceport – where it will be readied for launch. Previously known as GMES, Copernicus is a European Space Agency (ESA) program in partnership with the European Commission. Its goal is to ensure European independence in the acquisition and management of environmental data concerning the planet, to support European authorities and policy-makers.

Sentinel-1A was designed and built by prime contractor Thales Alenia Space, which also produced the Sentinel-1B “sister” satellite now being integrated in Rome for a future launch. Both of these spacecraft use the company's Prima platform, developed on behalf of the Italian space agency.

After Sentinel-1A's launch by Soyuz, it will be placed into LEO at an altitude of 700km. The spacecraft carries an advanced radar sensor to image Earth's surface through cloud and rain, in day or night conditions. Data will be collected by various European receiving centers and in Italy by the Matera-based space center's ground station. The Sentinel programs being developed by ESA within the scope of Copernicus include five satellite families: Sentinel-1, designed to ensure the continuity of ERS and Envisat radar data; Sentinel-2 and -3, dedicated to Earth and ocean monitoring; and Sentinel-4 and -5, for meteorology and climatology, with a focus on studying the Earth atmosphere's composition.

Arianespace’s upcoming Soyuz mission with Sentinel-1A will mark the medium-lift vehicle’s seventh flight from French Guiana since its 2011 introduction at the equatorial launch site. The Arianespace infosite is located at http://www.arianespace.com/