Russia to Use their Angara-A5 Rocket for Satellite Launches 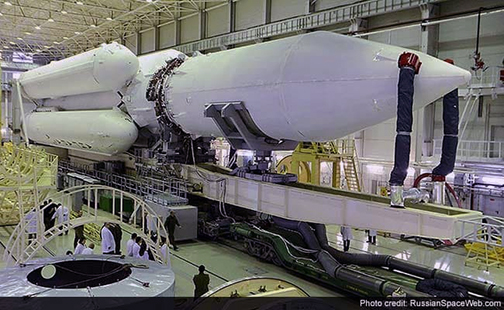 Photo of a Russian Angara rocket.

The Russian Defense Ministry is planning to use the Angara-A5 heavy-class carrier rockets to launch its satellites from the Vostochny space center in Russia's Far East, this according to a Sputnik news agency report.

Angara-A5 is Russia's newest heavy-class rocket, developed by the Moscow-based Khrunichev State Research and Production Space Center. This is the first orbit-capable rocket developed by Russia since the fall of the Soviet Union and is intended to replace older Proton-M rockets. According to the center, an Angara A5 rocket can carry up to 24.5 metric tons of payload to LEO.

Russian President Vladimir Putin has said Angara rockets are tasked with sending military and dual-purpose satellites into orbit, which would enhance defense capability of Russia and its security partners. Russia carried out the first test launch of Angara-A5 rocket in 2014 at Plesetsk cosmodrome in Russia's northern Arkhangelsk region. The second launch of Angara A5 is scheduled for 2019.