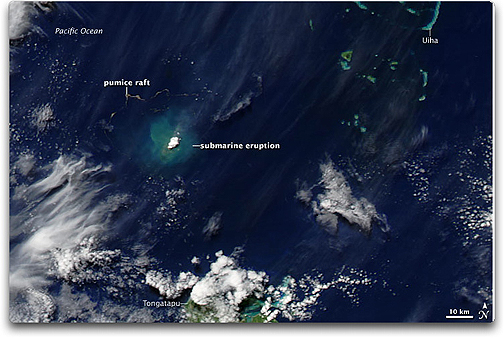 What amazing technology — a submarine volcanic eruption occurred in the Tonga Islands of the South Pacific in mid-March 2009 and photos are transmitted worldwide for all to marvel. The Moderate Resolution Imaging Spectroradiometer (MODIS) on NASA’s Aqua satellite captured this image of volcanic activity on March 18, 2009. In this image, the area around the eruption appears bright blue-green, likely resulting from sediment suspended in the water. The brilliant white patch at the center of the sediment-rich area may result from vapor released by the volcano. NASA images by Jeff Schmaltz, MODIS Rapid Response Team. Submarine Eruption in the Tonga Islands: Caption by Michon Scott. Instrument: Aqua - MODIS 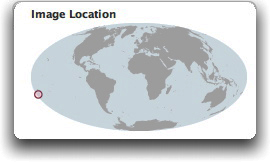 Northwest of the eruption site, a serpentine pumice raft floats on the water. The highly porous nature of pumice enables this volcanic rock to form floating rafts. (A larger pumice raft resulted from a similar eruption in the Tonga Islands in August 2006.)

The Tonga Islands occur along the Ring of Fire — a ring of heightened seismic activity in the Pacific Basin. According to a bulletin from the U.S. Air Force Weather Agency, this eruption was detected through a ground-based observation at Tonga Airport on Tongatapu Island on March 17, 2009. Although the eruption appears unspectacular in this image, views from the ocean surface showed massive columns of volcanic ash and steam shooting 10 kilometers (6 miles) skyward, according to the Associated Press. The volcano did not, however, pose a danger to nearby islanders.