The same NOAA satellites that helped forecasters track weather and wildfires were also critical in rescuing a record 421 people from potentially life-threatening situations throughout the United States and its surrounding waters in 2019.

NOAA’s polar-orbiting and geostationary satellites are part of the global Search and Rescue Satellite Aided Tracking System, or COSPAS-SARSAT, which uses a network of U.S. and international spacecraft to detect and locate distress signals from emergency beacons aboard aircraft, boats and from handheld Personal Locator Beacons (PLBs) anywhere in the world.

Of the 421 U.S. rescues last year, 306 were water rescues, 38 were from aviation incidents and 77 were from events on land, where PLBs were used. Florida had the most SARSAT rescues with more than 100, followed by Alaska with more than 50. The previous rescue record of 353 (total) was set in 2007.

When a NOAA satellite pinpoints the location of a distress signal in the U.S., the information is relayed to the SARSAT Mission Control Center at NOAA’s Satellite Operations Facility in Suitland, Md. From there, the information is sent quickly to Rescue Coordination Centers, operated either by the U.S. Air Force for land rescues, or the U.S. Coast Guard for water rescues. NOAA also supports rescues globally by relaying distress signal information to international SARSAT partners. 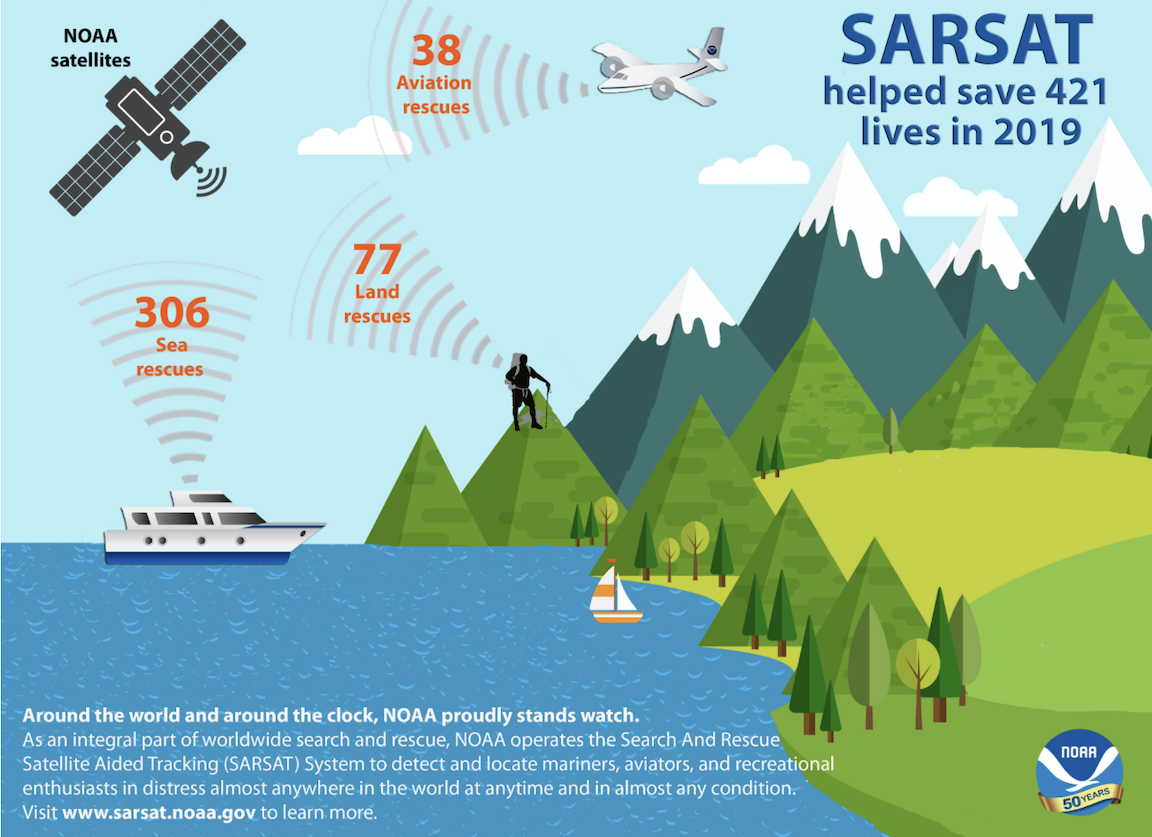 “Each person rescued underscores the success of nearly 40 years of teamwork with the U.S. Coast Guard, the U.S. Air Force, NASA and our international partners,” said Steve Volz, assistant NOAA administrator for its Satellite and Information Service.

In one harrowing case last year, the impact of the crash of a small aircraft near Skwentna, Alaska, activated the emergency beacon onboard. The Alaska Rescue Coordination Center relayed the distress location to the Alaska Air National Guard responders, who pulled the two passengers from the wreckage and they received medical treatment at an area hospital.

In another rescue, six people were saved from a sinking boat 20 miles east of Sunny Isles, Fla. The U.S. Coast Guard received the emergency beacon alert and directed an emergency response boat to the scene.

Since its start in 1982, COSPAS-SARSAT has been credited with supporting more than 48,000 rescues worldwide, including nearly more than 9,000 in the United States and its surrounding waters.

By law, beacon owners are required to register their devices online with NOAA. The registration information helps provide better and faster assistance to people in distress, and can guard against false alarms. It may also provide information about the location of the emergency and what type of help may be needed.

Find out more about NOAA SARSAT.