Iceland’s Eyjafjallajökull volcano continued to emit a dense plume of ash and steam on May 7, 2010. The plume extends southeast from the volcano, but curves south beyond the lower edge of the image. 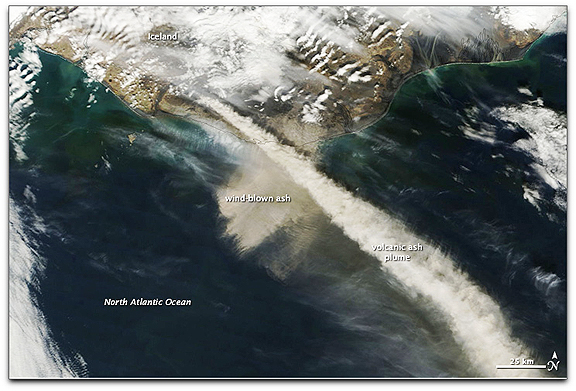 The large image, which includes a wider area, reveals that the ash is blowing over the Atlantic Ocean west of Ireland. On Iceland, low-level winds pick up ash that had settled on the land. This plume of resuspended ash blows south from the island. The higher-elevation volcanic plume casts a dark shadow on the lower-elevation resuspended ash. The Moderate Resolution Imaging Spectroradiometer (MODIS) on NASA’s Terra satellite captured this image on May 7, 2010. The large image is the highest-resolution version of the image, but the MODIS Rapid Response Team provides the image in additional resolutions.