UPDATE: ULA + NASA’s LDCM Launch Is Up And Away Without A Hitch (Launch) 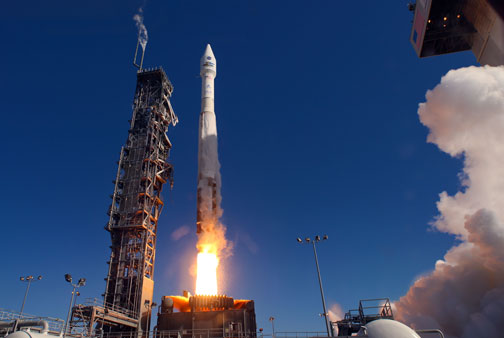 Vandenberg Air Force Base, Calif. (Feb. 11, 2013) – A United Launch Alliance Atlas V rocket blasts off from Space Launch Complex-3 at 10:02 a.m. PST with NASA’s Landsat Data Continuity Mission (LDCM) payload. This was the 2nd ULA launch of the year, the 36th Atlas V mission, and the 68th ULA launch in just over six years. The Landsat Program provides repetitive acquisition of high resolution multispectral data of the Earth's surface on a global basis. The data from the Landsat spacecraft constitute the longest record of the Earth's continental surfaces as seen from space.   Photo by Pat Corkery, United Launch Alliance

A beautiful day at mission base Space Launch Complex-3 at Vandenberg Air Force Base in California was the scene for the successful launch of he Landsat Data Continuity Mission (LDCM) Launch Readiness Review (LRR).

"We are privileged to work together with NASA and such a strong LDCM mission team,” said Jim Sponnick, ULA vice president, Mission Operations. “This is the second NASA mission ULA has launched in just 12 days. The ability to successfully execute this launch rate is a testament to a very dedicated and skilled workforce, excellent teamwork with our NASA customer and all of our mission partners, and a one-launch-at-a-time focus that enabled both the TDRS-K launch on January 30 and today’s LDCM launch, both of which delivered critical capabilities to orbit.”

Today’s mission was launched aboard an Atlas V 401 configuration vehicle, which includes a 4-meter diameter payload fairing. The Atlas booster for this mission was powered by the RD AMROSS RD-180 engine and the Centaur upper stage was powered by a single Pratt & Whitney Rocketdyne (PWR) RL10A-4 engine.

The Landsat Program provides repetitive acquisition of high resolution multispectral data of the Earth's surface on a global basis. The data from the Landsat spacecraft constitute the longest record of the Earth's continental surfaces as seen from space. 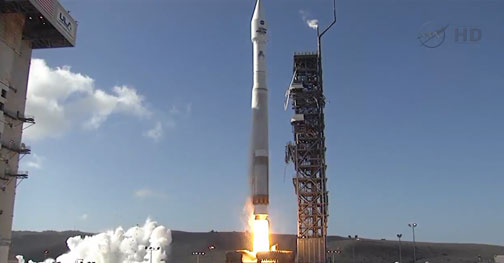 “It was a smooth launch and deployment for the LDCM satellite earlier today and it is now performing very well early in its mission,” said Mike Miller, Orbital’s Senior Vice President of Science and Environmental Satellite Programs.  “The LDCM satellite will enable the USGS and NASA to maintain the longest continuous record of Earth environmental data gathered from space.  We are honored to have been an integral part of this legendary program that provides critical Earth observation data that benefits millions of people and a wide variety of industries worldwide.”

LDCM is the company’s 145th satellite to be launched since 1982, including 76 commercial and 69 government spacecraft. Once its checkout is completed, it will join Landsat 4 and Landsat 5, two earlier Orbital legacy spacecraft that have supported the Landsat program for three decades.

Over the next several weeks, Orbital’s LDCM engineering team will support NASA and USGS with in-orbit testing of the satellite to verify all systems are operating as planned.  Once LDCM is fully tested, USGS will operate the spacecraft and collect data from multiple ground stations worldwide.

“We are incredibly proud of our dedicated team who designed, built, tested and participated in the launch of this remarkable observatory,” said Daren Iverson, Orbital’s LDCM Program Manager. “Today’s launch is the culmination of over five years of precise engineering and high-tech craftsmanship, along with proven science-gathering technology, coming together to provide a closer look at our planet.  It has been an extraordinary experience to be part of this program and to partner with our NASA and USGS customers.  In the future, we hope to continue our critical role in their mission by building the next generation of Landsat spacecraft.”

The Landsat series of satellites, developed and operated by the U.S. Geological Service (USGS), has collected a continuous set of global multi-spectral land data for more than four decades. Once in orbit, the LDCM satellite will become Landsat 8, and will take over for the venerable, but aging Landsat 7 which has been in service seven years beyond its design life. Landsat 8 will scan the entire globe on an annual basis, with a complete U.S. territory data set collected every 16 days.

The LDCM mission marks the first Atlas V launch from the West Coast with our partners the National Aeronautics and Space Administration (NASA). My thanks to the entire team for its dedication in bringing

The Landsat Data Continuity Mission is NASA’s eighth satellite in the Landsat series and continues the Landsat program’s critical role in monitoring, understanding and managing the resources needed for human sustainment such as food, water and forests. As our population surpasses seven billion people, the impact of human society on the planet will increase, and Landsat monitors those impacts as well as environmental changes.

Since 1972, NASA’s Landsat fleet has provided the longest continuous record of the Earth’s surface as seen from space, providing the world with unprecedented information on land cover changes. The knowledge gained from 40 years of continuous data contributes to research on climate, carbon cycle, ecosystems, water cycle, biogeochemistry and changes to Earth’s surface, as well as our understanding of visible human effects on land surfaces. Data collected by Landsat has, over time, led to the improvement of human and biodiversity health, energy and water management, urban planning, disaster recovery and agriculture monitoring, all resulting in incalculable benefits to the U.S. and world economy. Landsat data have been used to monitor water quality, glacier recession, sea ice movement, invasive species encroachment, coral reef health, land use change, deforestation rates and population to assess damage from natural disasters such as fires, floods, and tsunamis, and subsequently, plan disaster relief and flood control programs.

Weighing in at approximately 6,100-lb, fully fueled, the satellite bus is built by Orbital Sciences Corporation, and supports the Operational Land Imager (OLI) and Terrestrial Infrared System (TIRS) as the primary instruments. With each pass, OLI will collect Earth views in the visible, near infrared and short wave infrared portions of the light spectrum with up to 49 ft resolution along a 115-mile wide swath. TIRS will measure land surface temperature in two thermal infrared bands with a new technology that applies quantum physics to detect heat. LDCM will be positioned in a nearly-polar, sun-synchronous orbit which allows a view of the entire Earth once every 16 days and will measure the Earth’s surfaces in four distinct frequency bands. 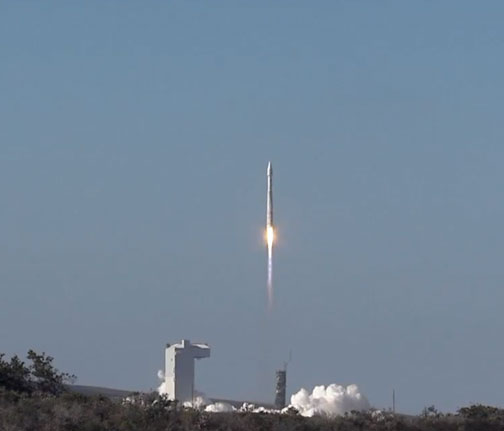 The Atlas V 401 consists of a single Atlas V booster stage, the Centaur upper stage, and a 4-m diameter payload fairing (PLF). The Atlas V booster is 12.5 ft in diameter and 106.5 ft in length. The booster’s tanks are structurally rigid and constructed of isogrid aluminum barrels, spun-formed aluminum domes, and intertank skirts. Atlas booster propulsion is provided by the RD-180 engine system (a single engine with two thrust chambers). The RD-180 burns RP-1 (Rocket Propellant-1 or highly purified kerosene) and liquid oxygen, and delivers 860,200 lb of thrust at sea level. The Atlas V booster is controlled by the Centaur avionics system, which provides guidance, flight control, and vehicle sequencing functions during the booster and Centaur phases of flight.

The Centaur upper stage is 10 ft in diameter and 41.5 ft in length. Its propellant tanks are constructed of pressure-stabilized, corrosion resistant stainless steel. Centaur is a liquid hydro- gen/liquid oxygen- (cryogenic-) fueled vehicle. It uses a single RL10A-4-2 engine producing 22,300 lb of thrust. The cryogenic tanks are insulated with a combination of helium-purged insulation blankets, radiation shields, and spray-on foam insulation (SOFI). The Centaur forward adapter (CFA) provides the structural mountings for the fault-tolerant avionics system and the structural and electrical interfaces with the spacecraft.

The LDCM mission is encapsulated in the 4-m (14-ft) diameter extended payload fairing (EPF). The EPF is a bisector (two-piece shell) fairing consisting of aluminum skin/stringer construction with vertical split-line longerons. The vehicle’s height with the PLF is approximately 192 ft.