[SatNews] A solution to this, according to Ngcaba, would be the construction of a “Telehouse” in Africa... 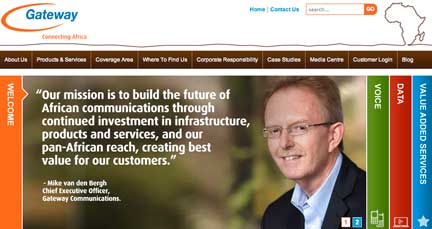 The thought provoking discussion facilitated by Russell Southwood (editor of Balancing Act) addressed topics ranging from rural connectivity and the role telecoms plays in African economies, to pricing for consumers and the future of data use in Africa.

It was emphasized by Saidou that 20-40 percent of the African population does not have access to voice let alone data and that it is these individuals, mostly in rural areas, that demand connectivity. There are a number of challenges experienced by mobile network operators (MNOs) when looking to expand to remote areas in Africa. Innovative products such as Gateway’s Celldirect, a satellite-based cellular backhaul solution, aims to serve part of this 20-40 percent allowing MNOs to reach these areas; providing mobile communications to thousands of communities who would have otherwise remained unconnected.

Wood asserted that telecoms development in a country can open up large parts of the economy. “The challenge is driving this growth in landlocked countries in Africa that don’t have access to sub-sea cables. We need to break down the barriers to cross border roll-out,” he said. The way is being paved in this area through a variety of initiatives including Gateway Communications’ SADC terrestrial roll-out project, which has brought fibre connectivity to Malawi and Zambia.

Looking at upcoming data trends, Ngcaba acknowledged that pricing structures need to change. In addition, he focused on the fact that much of Africa’s telecoms traffic continues to be routed via Europe instead of staying on the continent. A solution to this, according to Ngcaba, would be the construction of a “Telehouse” in Africa: “This will interconnect all the cable and satellite operators so that intra-Africa traffic can be switched and peered within the African continent.” He reiterated that the construction of this type of infrastructure would require the relationship between industry players to become cooperative rather than competitive.

With regard to data in Africa, Waita argued that while we all aspire to democratize data usage, actually delivering it can be an issue. “In Kenya you have 8-5 sub-sea fiber cuts a day. We need much better geo-mapping to overcome this problem and addressing infrastructure development challenges more broadly must be a priority. ” Gateway takes a hybrid approach to connectivity, connecting customers using fiber, wireless and satellite technologies, which allows for back-up should such outages occur.

When asked why prices in Africa were so high, Masie responded by saying that the highest costs come from the consumption of foreign content. “Foreign players could bring themselves, their platforms and their content to the continent.” He continued by adding that quality African-based content platforms would be a great opportunity to generate local African content and share it with the world: “Within the next two years we will see major global players opening platforms in Africa,” he predicted.

His vision of a post-PC and post-voice world was one where less voice communication will take place. “Voice will be replaced by gesture-based communication through devices.” He also added that storage capacity is evolving at such a rapid rate (approximately doubling every 12-13 months) that we will soon be able to get a snapshot of the entire Internet on a single device.

Mike van den Bergh concluded by emphasizing that the question industry leaders should be asking: “is not about what to do with all this capacity, but do we have enough?” He concurred with Ngcaba’s view on cooperation. “People need to be invested in the solution – I am excited about the future prospects in African connectivity and finding a better way to deliver services and extend access across the continent. Working together will help us move forward. ”

Van den Bergh later added, “I am heartened to see that cooperation has been identified as a vital contributor to connecting Africa into the future. Connecting Africa has always been the Gateway mission and is something that requires a collaborative approach to fully realize the continent’s immense potential. Cooperation between operators, regulatory collaboration and a combined use of technologies will all play a vital role and at Gateway our hybrid approach to technology certainly places us in an ideal position to embrace this.”