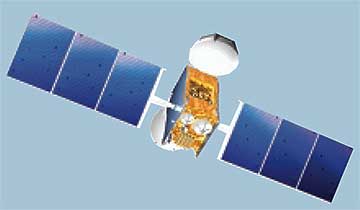 Artistic rendition of the ISRO's GSAT-10 satellite
[SatNews] India’s GSAT-10 telecommunications satellite—which is one of two passengers for Arianespace’s upcoming Ariane 5 mission in September—has been...

...put through its paces during pre-flight preparations at the Spaceport in French Guiana, including a solar panel deployment test. This checkout step involves the extension of its multi-segment solar panels, validating the proper operation before they are definitively stowed against the satellite in the final liftoff configuration. The test uses an overhead latticework that helpes support the solar panel's weight, simulating zero gravity conditions of space as the panel opens to its full length. Performed under the control of GSAT-10 satellite team members, the extension validation was conducted in the S5C high bay area of the Spaceport’s S5 payload preparation center, the largest individual hall in this facility.

GSAT-10 was developed by the Indian Space Research Organisation (ISRO) and will meet the growing need for Ku- and C-band transponder capacity. It is to become part of the Indian National Satellite (INSAT) system of geostationary spacecraft—representing one of the largest domestic communications satellite networks in the Asia-Pacific region. Configured with 12 Ku-, 12 C- and 12 extended C-band transponders, GSAT-10 uses the I-3K satellite bus developed by ISRO, with a power capability of some six kilowatts and a liftoff mass estimated at 3,400kg.

Also included on GSAT-10 is the GAGAN (GPS and GEO augmented navigation) payload, which will support the Indian government’s implementation of a satellite-based regional capability to assist aircraft navigation over Indian airspace and in adjoining areas. The initial GAGAN payload was carried aboard the GSAT-8 spacecraft, orbited by Arianespace on an Ariane 5 mission in May 2011.

One of GSAT-10’s two solar panels is extended during deployment verifications performed in the Spaceport’s S5 payload preparation center.
Photo is courtesy of Arianespace.

The upcoming Ariane 5 flight with GSAT-10 and the Astra 2F satellite as its co-passenger is set for September 21 from the Spaceport’s ELA-3 launch complex. This will be Arianespace’s fifth mission from French Guiana in 2012 with the heavy-lift workhorse.