The three Expedition 58 crew members have finished packing the SpaceX Dragon cargo craft with science experiments and hardware today. Final preparations for the vehicle’s departure are now on hold while teams wait for favorable weather in the splashdown area for Dragon’s return. 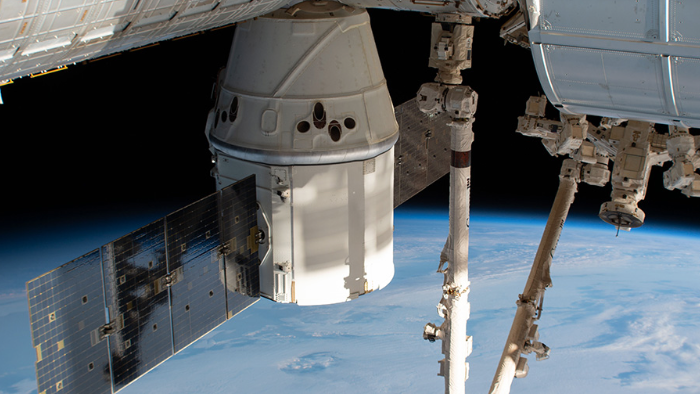 The SpaceX Dragon cargo craft is pictured attached to the International Space Station’s Harmony module as the orbital complex orbited 261 miles above the Indian Ocean southeast of the continent of Africa. The Canadarm2 robotic arm vertically splits the frame prior to grappling the spacecraft ahead of planned departure activities.

Dragon was scheduled for departure early Thursday morning from the International Space Station but mission managers made the decision to delay departure. Managers are assessing the backup release date of Sunday, Jan. 13 for Dragon’s return to Earth.

Robotics controllers maneuvered the Canadarm2 robotic arm Wednesday and grappled Dragon while it was still attached to the Harmony module. Prior to Dragon departure, they will remotely uninstall Dragon from Harmony and slowly guide it to its release position.

Astronaut Anne McClain will be in the cupola when robotics experts command the Canadarm2 to release Dragon finalizing its mission at the orbital lab. She’ll monitor its departure while her crewmates Commander Oleg Kononenko and Flight Engineer David Saint-Jacques work on their daily science and maintenance tasks.

Dragon, which arrived at the station Dec. 8, will orbit Earth a few more hours on its own before reentering the atmosphere. It will parachute to a splashdown in the Pacific Ocean off the coast of southern California where SpaceX personnel will retrieve the space freighter. They’ll deliver it to shore where NASA engineers will extract the precious cargo for immediate shipment to investigators around the country for analysis.