NASA + JAXA—GPM To Be Lofted In February (Launch Preparation) 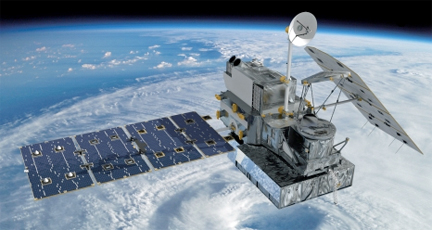 [SatNews] Environmental research and weather forecasting are about to get a significant technology boost as NASA and the Japan Aerospace Exploration Agency (JAXA) prepare to launch a new satellite in February.

NASA and JAXA selected 1:07 p.m. to 3:07 p.m. EST Thursday, February 27 (3:07 a.m. to 5:07 a.m. JST Friday, February 28) as the launch date and launch window for a Japanese H-IIA rocket carrying the Global Precipitation Measurement (GPM) Core Observatory satellite from JAXA's Tanegashima Space Center. GPM is an international satellite mission that will provide advanced observations of rain and snowfall worldwide, several times a day to enhance our understanding of the water and energy cycles that drive Earth's climate. The data provided by the Core Observatory will be used to calibrate precipitation measurements made by an international network of partner satellites to quantify when, where, and how much it rains or snows around the world.

With the addition of the new Core Observatory, the satellites in the GPM constellation will include the NASA-National Oceanic and Atmospheric Administration (NOAA) Suomi National Polar-orbiting Partnership mission, launched in 2012; the NASA-JAXA Tropical Rainfall Measuring Mission (TRMM), launched in 1997; and several other satellites managed by JAXA, NOAA, the U.S. Department of Defense, the European Organisation for the Exploitation of Meteorological Satellites, the Centre National D'Etudies Spatiales of France and the Indian Space Research Organisation.

"We will use data from the GPM mission not only for Earth science research but to improve weather forecasting and respond to meteorological disasters," said Shizuo Yamamoto, executive director of JAXA. "We would also like to aid other countries in the Asian region suffering from flood disasters by providing data for flood alert systems. Our dual-frequency precipitation radar, developed with unique Japanese technologies, plays a central role in the GPM mission."

The GPM Core Observatory builds on the sensor technology developed for the TRMM mission, with two innovative new instruments. The GPM Microwave Imager, built by Ball Aerospace and Technology Corp., Boulder, Colo., will observe rainfall and snowfall at 13 different frequencies. The Dual-frequency Precipitation Radar, developed by JAXA with the National Institute of Information and Communication Technology in Tokyo, transmits radar frequencies that will detect ice and light rain, as well as heavier rainfall. It also will be able to measure the size and distribution of raindrops, snowflakes and ice particles.

For more information on the Global Precipitation Measurement mission, visit: http://www.nasa.gov/gpm and http://www.jaxa.jp/projects/sat/gpm/index_e.html