SES ASTRA, a SES company (Paris: SESG) (LuxX: SESG), announced that after additional technical checks, the launch of its new satellite ASTRA 3B is now scheduled for April 9, 2010. The company said that the satellite will be launched into space between 18:59 and 19:48 local time from the Kourou Space Centre in French Guiana. 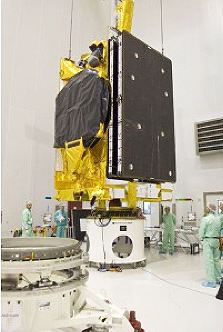 EADS Astrium E3000 satellite bus (Pictured: Amazonas 2 is readied in the Spaceport’s S5 payload preparation facility)
ASTRA 3B was built by EADS Astrium in Toulouse using a Eurostar E3000 platform. ASTRA 3B will be located at 23.5 degrees East, ASTRA's orbital position for delivering DTH broadcast services mainly to the Benelux and Eastern Europe as well as two-way broadband services across Europe and the Middle East. This new satellite is expected to allow SES ASTRA to extend the geographical coverage and the service to customers and offer DTH TV reception from Spain to the Black Sea. In addition, it will also help SES ASTRA to further optimise the spectrum use at 23.5 degrees East. The company said that ASTRA 3B will join ASTRA 3A and enable it to release its satellites ASTRA 1E and ASTRA 1G for other missions. ASTRA 1E and ASTRA 1G are currently positioned at 23.5 degrees East.