[SatNews] The twelfth Soyuz to be operated from the Spaceport is now in the launch zone following this workhorse medium-lift vehicle’s rollout at Arianespace in French Guiana on a mission to orbit two more European Galileo navigation satellites. 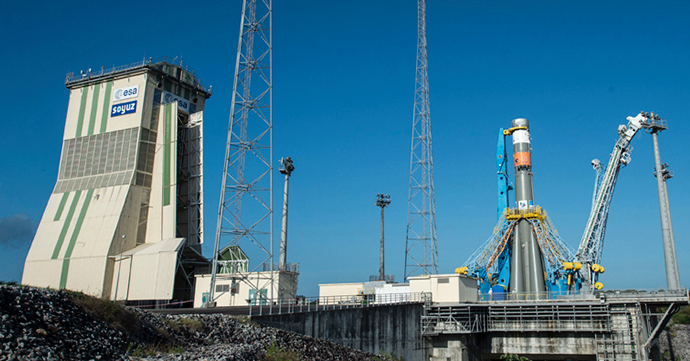 The Soyuz for Arianespace’s Flight VS12 is shown after being suspended over the launch pad by four support arms. At left is the 53-meter-tall mobile gantry, ready for its move-in to protect Soyuz during the integration of its “upper composite.”

Using the procedures that have been followed since Russia’s Soyuz ushered in the Space Age, the basic three-stage vehicle for Arianespace’s September 10 Flight VS12 rolled out from its MiK integration building in the Spaceport’s northwestern sector this morning, and was transferred horizontally to the ELS launch zone by a transporter/erector rail car.

The Soyuz was then erected in its vertical position and suspended over the launch pad, to be held in place by four large support arms.  This was
followed by the 53-meter-tall mobile gantry’s move-in to protect the launcher, providing a safe environment for installation of the “upper
composite”, consisting of two Galileo spacecraft, the Soyuz’s Fregat upper stage and a two-piece protective payload fairing.

Flight VS12’s passengers are the fifth and sixth FOC (Full Operational Capability) spacecraft in Europe’s Galileo navigation program, and have been designated “Alba” and “Oriana", continuing the naming process after children who won a painting competition organized by the European Commission in 2011.

These satellites were built by OHB System, with Surrey Satellite Technology Ltd. supplying their navigation payloads.

The European Commission is managing and funding Galileo’s FOC phase during which the network’s complete operational and ground infrastructure is being deployed. The European Space Agency has been delegated as the design and procurement agent on the Commission’s behalf.