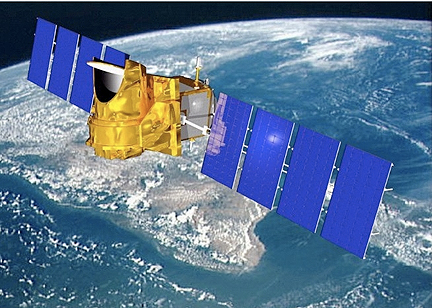 Artistic rendition of the Megha-Tropiques satellite...image courtesy of CNES
[SatNews] This event will find the satellite as well as three nanos...

The Indian Space Research Organisation plans to launch Megha-Tropiques, an advanced weather and climate satellite, onboard Polar Satellite Launch Vehicle (PSLV) later this month. The satellite would be launched aboard ISRO's workhorse PSLV from spaceport Sriharikota, ISRO Chairman K. Radhakrishnan told reporters. "The preparations are going on," he said, adding the satellite would carry four scientific instruments, developed jointly by ISRO and French national space agency centre National d'Etudes Spatiales (CNES) to provide information on rain above the oceans and water vapour content in the atmosphere.

According to ISRO, the agency and CNES were pursuing co-operative programs since 1993, under which joint satellite missions like Megha-Tropiques were taken up to study the atmosphere and the oceans. In addition to Megha-Tropique, Radhakrishnan said the PSLV would also carry three nano satellites for monitoring green house gases. One nano will be from Luxembourg, one from SRM University and one from IIT Kanpur.

Additionally, the ISRO chief said the Geo-synchronous Launch Vehicle (GSLV) with indigenously-developed cryogenic engine would be launched during "the second quarter of next year." In December 2010, homegrown launch vehicle GSLV-F06 fitted with a Russian cryogenic engine carrying communications satellite GSAT-5P on-board failed in its mission when the rocket developed difficulties within seconds after lift-off from Sriharikota.