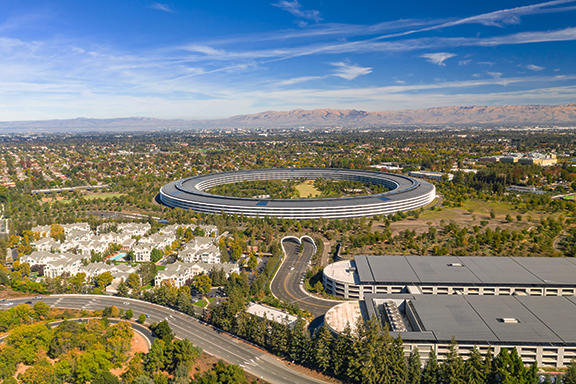 SATCOM continues to draw increased interest by major technology actors... in the case of Apple, this interest is... according to several reports by major news outlets... to drive comms directly to the firm's devices from on-orbit satellites and the project has apparently been in the firm's development pipeline since 2017.

This is definitely becoming a somewhat crowded market, with the Amazons and SpaceXs of the world driving new LEO constellations to service the entire globe and bathe the previously unconnected with beams of cyberspace connectivity.

With the numerous reports now filtering to the internet, Apple's secret is "out"... Bloomberg News reporters, apparently infiltrating the hallowed halls of the computer, device and services company, indicated around 12 engineers have joined the form to work on this technology. Whether or not these folk are developing satellite to device beam technology, or Apple satellite builds, is unknown as of this writing. However, given the firm's astounding monetary wherewithal, none of these arenas are outside the realm of possibility.

Bloomberg News filed a story indicating that the former head of satellite engineering at Google and the founder of Ettus Research have been taken aboard the Apple ship in Cupertino, California. According to Fox Business, former technologists that worked at Skybox Images, prior to its acquisition by Google, are heading up this Apple mission, those being John Fenwick (the former head of Google's spacecraft operations) and Michael Trela. Additionally, the company has allegedly been involved in a number of conversations regarding LEO satellite launches with Boeing.

Key motivation for these moves by the company could certainly be with the aim to reduce the influence of service providers to reduce consumer as well as Apple dependency on those firms as well as to increase Apple's ability to provide better maps and location tracking. Mix in the burgeoning 5G environs for wireless connectivity and realize Apple, even if somewhat late to the game, has the capability to surmount numerous challenges to provide products that will be eagerly consumed.

SATCOM and 5G services provisioning are certainly within the firm's technology purview and, if successful, could easily please consumers with advanced products, all the while generating higher atmospheric streams of revenue for Apple.